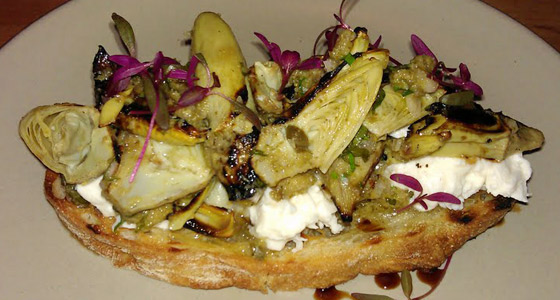 The great thing about LA and its mythical allure is that even when the world seems to be falling apart there is never any shortage of dreams. Case in point: The fact that new restaurants just keep showing up every day like so many would-be stars. And being that we are in the what’s-hot-now capital of the world, here are 10 new restaurants in Los Angeles that are making a buzz.

Freddy Smalls Bar & Kitchen
I wasn’t sure what the name was all about, but after visiting Freddy Smalls two nights before it officially opened to the public, I can now share the story behind the moniker: Bar maestro David Fleischer (you know him from Seven Grand) said the space was called Freddy’s way back when and during the whole process of opening the restaurant they had to give it a name, so why not Freddy Smalls since it’s both a nod to the past and a tip of the hat to the all-American kind of guy who’d come to a cool, sorta hidden NYC-ish place like this? He also said something about how the cocktails and food were meant to be a haiku and although I can’t quote him verbatim, suffice it to say that the drinks here are perfectly nuanced and the kitchen turns out gorgeous and flavorful things, including  something as seemingly simple as artichoke burrata bruschetta (check out the main photo of this list). www.freddysmalls.com

Wolfgang Puck @ Hotel Bel Air
Now that the much-ballyhooed reopening of Hotel Bel Air has finally arrived, so has Puck’s latest namesake. The restaurant is spacious and handsome but thankfully doesn’t feel particularly pretentious. The outdoor courtyard is probably my favorite spot and the food is delish, including that famous tortilla soup. Naturally, it’s quite a scene here, so you can count on some good people watching. When I was here on opening night (okay, it was the night after) some of the celebs on site: Ryan Seacrest, Chelsea Handler, “Real Housewife” Kyle, Larry King and Wolfgang, of course. www.hotelbelair.com

Ahn Joo – Americana @ Brand
I haven’t been to this place yet, but I already know I love it because I’ve been eating chef Debbie Lee’s spicy-licious Korean pub grub from her Ahn Joo truck ever since she hit the streets with that thing. (Actually, I’ve been eating her food even before the truck.) So there. Conveniently located at a mall (for shoppers like me, this is a perfect sitch), the Korean snack bar serves favorites from the truck as well as new items from her cookbook “Seoultown Kitchen.” Get it, girl. www.ahnjoo.com

Mercato di Vetro – West Hollywood
You don’t even have to take a step inside this place to be impressed. The space formerly known as MI6 and Foxtail has been transformed into a real mercato di vetro (market of glass). The glassed-in, two-story restaurant, bar and marketplace is the hottest spot in town right now (it is an SBE property, after all) with lots of Italian-inspired shared plates, tons of vino and a see-and-be-seen crowd. Literally. You can see the crowd right through the walls. www.mercatodivetro.com

Erbe Matte – Beverly Hills
On a fairly quiet stretch of Canon not far from the Montage is where you’ll find this pretty, cozy space that used to be Tiger Sushi for about a minute. (Random tidbit: I sat next to Victoria Beckham and her kids back then and she was actually wearing flip-flops.) Anyway, Erbe Matte gets brownie points just for trying something a little creative. Namely, adding Korean flavor to the overwhelmingly Italian bent of this neighborhood. The menu is definitely not fusion, but straight-from-Korea chef Louis Kim wanted to add some other options to the Italian side of things. So you can have your linguine alle vongole and jap-che, too. www.erbematte.com

The Churchill – Los Angeles
This new gastropub on Third Street is named after Winston and could probably do a good job making you as rotund as the old guy, what with all the food they’re serving. Breakfast, lunch and dinner is here for the taking — including a takeout window open 7am-2am – with vittles ranging from fresh fish and braised rabbit gnocchi to DELICIOUS PIZZA (order the wild mushroom and artichoke-burrata-pistachio-arugula, you won’t be sorry). As for the pub part, there are lots of drinks and even a place upstairs with a DJ. In case you want to work off a few of those calories. www.the-churchill.com

The Fat Dog – Fairfax District
They had me at dog. Seriously. Any place that not only names itself after the loveable beast but also creates a space specifically for woof lounging is A+ in my book. (Not to mention offering a huge menu with brunch, lunch, dinner and happy hour.) You can never have too many dog-friendly gastropubs in LA and I hope this place lasts. www.thefatdogla.com

Fukuburger – Hollywood
Excuse me, what did you say? Looks like Umami isn’t the only burger joint in town with a weird name. The food truck and pop-up number from Pink Taco guy Harry Morton is now open for biz on Cahuenga. I’m not a meat eater but wasabi mayo, pickled cucumbers, miso-glazed bacon and fried egg on a burger sounds ridiculously tempting. www.fukuburger.com

Mendocino Farms – West Hollywood
For those who like a good sammich, this mini-chain seems to hit the spot. Already popular with the #DTLA crowd and the Marina folks, Mendocino Farms is all about seasonal, local sandwiches infused with that Nor Cal slow-food vibe. There’s a little something for everyone, so whether you’re a meater, veggie or vegan, chances are you’re in for something good. And almost the entire menu is under $10. www.mendocinofarms.com

Take A Bao – Studio City
If you like soft, spongy discs filled things like duck confit, fried chicken or short ribs then this newcomer is for you. Based on its success at Westfield Century City mall, Take A Bao has branched out to show off their buns in the Valley. Speaking of … the bao buns are made especially for the restaurant in the SGV and ingredients are local, sustainable and hormone-free. There are also salads, noodles and rice bowls. www.takeabao.com