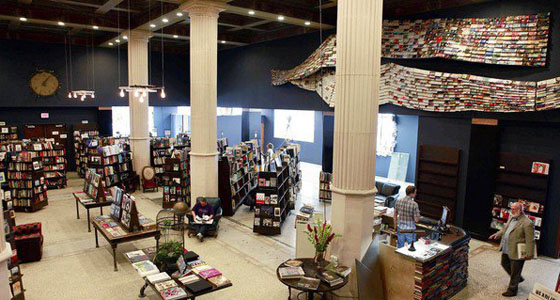 Read any good books lately? Even if you’ve forsaken the good old-fashioned paperback in favor of the iPad or Kindle, you have to admit there’s something special about turning the page, feeling the paper and reading the print in an actual book. So in the name of helping the noble scribe, encouraging everyone to read and supporting local businesses, here’s my list of 22 independent bookstores in Los Angeles that are worth checking out. If there are any other great locations that should be on this list, let me know!

Caravan Book Store – Downtown LA
If you didn’t know better you’d think this place was a movie set for a bookstore straight from the early 1900s. Instead, Caravan Book Store is the real deal, remaining almost identical to how it looked when it first opened in 1954. It’s owned and operated daily by Leonard Bernstein (his father started it back when Downtown actually had a Book Seller’s Row) and every musty nook and cranny is filled with what feels and looks like a piece of history: antique books, vintage postcards, model ships and endless other oddities. A real gem.

The Last Bookstore – Downtown LA
What started as a small bookstore in a Downtown LA loft in 2005 has now grown into a 10,000 square-foot space at 5th and Spring Street complete with a record store and coffee bar. Add the regular musical and literary events, Buy Counter for books/CDs/DVDs/vinyl and growing DTLA community and it looks like the Last Bookstore won’t become a self-fulfilled prophecy any time soon.

Vroman’s – Pasadena
It may look like Borders, but Vroman’s is still going strong as Southern California’s oldest and largest independent bookstore. (It was originally founded in 1894 by Adam Clark Vroman.) Sprawled over two floors, replete with a cafe, seating area for readings, children’s zone and countless shelves of hardbacks, paperbacks, magazines and other reading paraphenelia, Vroman’s is like the Ameoba of bookstores.

Book Soup – West Hollywood
Book Soup is as much a Sunset Strip icon as the Roxy or the Whisky. Ever since it opened in 1975 it’s been the place for a book launch with big names and big crowds. The space is cramped and cozy with lots of recommendation tags on the shelves to help you in your quest for literary satisfaction. Maybe that’s why the staff is usually a bit aloof (at least that’s been my experience every time I’ve been here)–they figure why bother them when they’ve already provided written suggestions? Guess I’m a little bit like those gluttons for punishment over in the S&M section … I keep coming back for more.

Piece of the past, here and now

BookMarc – West Hollywood
Not exactly sure if this cool shop on Melrose Place qualifies as an independent bookstore since its part of the Marc Jacobs empire, but it’s definitely not a big box-type deal and manages to have an indie sensibility that makes you want to support it. Contrary to what you might think, this is not a fashion and coffee table book place. You can find those here, but they’ve done a fine job filling the neat, welcoming space with diverse sections ranging from cooking, civil rights and classic lit to art, LGBT, feminism, music, poetry as well as rare and out-of-print editions that can cost anywhere from $65 to $5,000. And, of course, this being Marc Jacobs, you can get all those cutesy little $3 rings, $7 key chains, $10 necklaces and other gifty things. Bonus: The staff is really friendly and helpful.

Book Alley – Pasadena
If you don’t like the big-box feeling of Vroman’s (even though it is an indie), you’ll probably dig Book Alley, which touts itself as Pasadena’s finest used bookstore. They have a large selection of books on all subjects and also carry the largest selection of art, architecture, and photography books in the area.

Hennessey + Ingalls – Santa Monica & Hollywood
Don’t bother trying to spell the name–just get inside this store that carries the absolute best selection of books on the visual arts. The OG location is right around the corner from the Third Street Promenade and claims the title of largest art and architecture bookstore in the western United States. (The family-owned biz also runs a small publishing division, producing about six titles a year.) If you can’t make it to the Westside, check out the newer location at Space 15 Twenty in Hollywood.

Dawson’s Book Shop – Larchmont Village
Opened in 1905, Dawson’s Book Shop is the oldest continuously operating bookstore in LA. Now in its third generation of family ownership, the book shop–connected to the Michael Dawson Gallery–specializes in rare and out-of-print books about California history, Western Americana and photography. The gallery also has an extensive selection of fine vintage and modern art photography with regular events going on.

Love is in the air at Larry Edmunds Bookshop

The Secret Headquarters – Silver Lake
With a name like that it’s no surprise this indie bookstore specializes in comic book culture with primo graphic novels, trade paperbacks and monthly titles. In 2008, the Guardian named it one of the ten best bookshops in the world, the only American bookstore on the list. Kinda cool, right?

Larry Edmunds Bookshop – Hollywood
When you’re in the market for anything Tinseltown related, remember this name: Larry Edmunds. The store has been in business longer than any actor’s career (70+ years) and the shelves are stocked with 500,000+ movie photographs, 6,000+ original movie posters and 20,000+ books on movies, theatre, actors, acting and anything else about the art of entertainment.

Family – Fairfax Village
I make it a point to never use the “h” word. (Hint: Rhymes with dipster.) But this little shop in Fairfax Village with its stacks of pop culture, alterna-lit and undergroundish books, zines, small-press journals, indie artwork, graphic tees and smattering of CDs and vinyl is just the kind of place that those h-types incessantly hound. But don’t hold that against it. Family has real value.

Libros Schmibros – Boyle Heights
A lending library and used bookstore in Boyle Heights with a punny Spanish name. How great is that?

Distant Lands – Pasadena
Bound for safari in the Saharan Desert or a relaxing weekend in Santa Monica? Either way, this Pasadena mainstay is loaded with an enormous selection of books and maps for those with a major case of wanderlust. There’s also an adjoining travel gear shop so you can get everything you need for wherever you’re going.

Alias Books – West LA
Drive and you might miss this nondescript bookstore on Sawtelle that’s been buying and selling used books since 1959. They stock thousands of titles in a wide variety of subjects with an emphasis on art, literature, academic and scholarly books.

A few from my own personal collection

Stories – Echo Park
This Eastside hangout is perfect for those who like a side of organic fair-trade coffee with their Bukowski. You’ll find a well-stocked selection of new, used and rare books with a special emphasis on fiction, history, LA arcana, art, photography and philosophy as well as regular book readings and music performances.

Angel City Books & Records– Santa Monica
This is probably Santa Monica’s best kept bookstore secret. Just don’t let the Pier address fool you—it’s not physically on the Pier, it’s located off of Main Street on Pier Avenue. Once you find it, you’ll enjoy a surfeit of used books on everything from philosophy and spirituality to sci-fi, mystery and general interest literature. And lots of records, too.

Once Upon a Time – Montrose
A real neighborhood bookstore, Once Upon A Time is just the kind of quaint shop you’d expect to find in this area with a great selection of books aimed toward kids and the family. Bonus: It’s located next to Zeke’s BBQ.

The latest incarnation of the Last Bookstore

Half Off Books – Whittier
The charming, sprawling space formerly known as the Little Old Bookshop was saved from sudden death last year when a Nebraska transplant bought the store. Now called Half Off Books, the literary mainstay is where to find tons of new and used books, CDs, DVDs and other media. Uptown Whittier wouldn’t have been the same without it.

Small World Books – Venice
Freaks and geeks. Yes, folks, believe it or not there’s a great general bookstore right on the Venice Boardwalk. Small World is a good-sized shop with a wide selection of titles published by both major and small presses.

Traveler’s Bookcase – Los Angeles
Go around the world and back again without ever leaving LA. This great bookshop on the pedestrian-friendly stretch of West 3rd Street is quaint, a touch musty and wonderfully stocked with all sorts of fun travel books and a good selection of birthday and whatever-occasion cards.

What Food is Better than Sex?