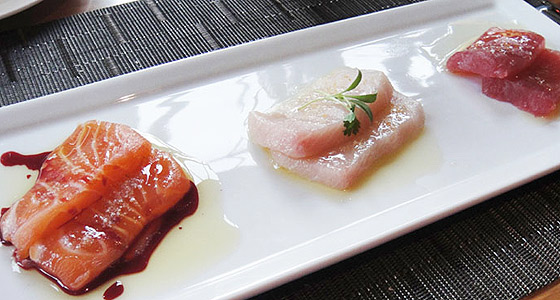 Eat much in 2010? So many new Los Angeles restaurants opened this past year and if you were anything like me, you ate at as many of them as you could. So what qualifies a restaurant to be considered among the best? One: the food has to be good–really good. Two: there’s gotta be some excitement beyond the food, like spectacular views (WP24) or an inspired approach (Test Kitchen, Forage), for example. Three: because I like it. In other words, making the “best of” list is my own tasty mix of style, substance, and subjective opinion. Happy eating!

Test Kitchen – 9575 W Pico Blvd, Los Angeles, CA 90035
Going out to eat in 2010 was never more exciting than at Test Kitchen, LA’s short-lived but brilliant culinary laboratory. Opened for just four months (August-December 2010), Test Kitchen was where LA’s most celebrated chefs offered never-before-tried menus, mixologists concocted delicious potions, and the at-capacity crowd (which, on any given night, had everyone from Jonathan Gold to Michael Voltaggio) buzzed with anticipation. This is one test we’re hoping pops up in 2011.  www.testkitchenla.com

Culina – 300 S Doheny Dr, Beverly Hills, CA 90211
This restaurant at the Four Seasons is just as swanky you would expect without any of the stuffiness you might have feared. The staff always makes you feel at home (if home is an enormous, beautiful charmer with a lush, heated outdoor patio) and chef Victor Casanova does wonders for your palate with clean, light, modern Italian fare that includes the must-try sweet corn ravioli stuffed with mascarpone.  www.culinarestaurant.com

WP24 by Wolfgang Puck – 900 W Olympic Blvd, Los Angeles, CA 90015
Wolfgang himself might not be in the kitchen of this expansive (and yes, expensive) restaurant and lounge that weaves along the 24th floor of the Ritz-Carlton, but so what! Not only does this place afford stunning views of the Downtown LA skyline, but it also offers artful renditions of Asian fusion and Chinese cuisine courtesy of chef David McIntyre. If you wanna splurge, this is where to do it.  www.wp24.com

Hatfield’s – 6703 Melrose Ave, Los Angeles, CA 90038
Okay, so technically Hatfield’s is not a “new-new” restaurant, but it did close its old location before opening up this space on Melrose in 2010. Chefs/co-owners Quinn and Karen Hatfield’s consistent take on California-French cuisine is some of the best to be had in LA, while the knowledgeable staff will help guide you through every course.  www.hatfieldsrestaurant.com

Cleo – 1717 Vine St, Hollywood, CA 90028
Like any SBE property, Cleo is one dining spot that delivers a real scene alongside the sustenance. The space is shiny and swank, and the Mediterranean small plates will make you want more. Brussels sprouts–shredded, salty, chewy yet crispy pieces sauteed in oil and tossed with almonds, capers and red wine vinaigrette–will change your life.  www.cleorestaurant.com

Scarpetta – 225 N Canon Dr, Beverly Hills, CA 90210
Folks in New York have been enjoying Scarpetta for years, so once chef Scott Conant opened up his first West Coast outpost at the Montage it was no surprise it became an instant hit. As for that famous, perfectly al dente house-made spaghetti with fresh tomato sauce and basil? Yeah, it alone is worth the visit.  www.scarpettala.com

Waterloo & City – 12517 W Washington Blvd, Los Angeles, CA 90066
LA finally got a real gastropub in 2010 with Waterloo & City. The homemade terrines are standouts (try the house-smoked salmon with fried egg and gribiche) as is the corn soup with Parmesan ravioli and the late-night menu’s curried chicken meatball pizza. And of course pubtails like the Dark & Stormy, Pimm’s Cup and Piccadilly Martini.  www.waterlooandcity.com

Forage – 3823 W Sunset Blvd, Los Angeles, CA 90026
Probably the most exciting dining concept along with Test Kitchen, Forage in Silver Lake is the little restaurant that could. Not only does the kitchen harvest food from local farms and ranches, but it also actively seeks produce from anyone who’d care to share. Have too many tangelos on your hand? Or extra peas from your garden? Bring them in and they just might be what’s cooking next time you stop by.  www.foragela.com

Red O – 8155 Melrose Ave, Los Angeles, CA 90046
Probably no other restaurant on this list had more hype surrounding it in 2010 than Red O, chef Rick Bayless’ first restaurant outside of Chicago. More of an SBE club experience than foodie destination (there’s a doorman with guest list at the entrance…seriously), Red O makes the cut based on chutzpah alone. (This is LA, after all.) Well, that and the deliciously smoky taquitos, chunky guacamole and cocktails like Flowerpot and La Sirena.  www.redorestaurant.com