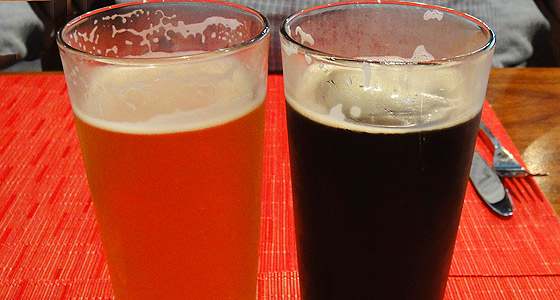 Sprechen ze Deutsche? Well, you no longer have to. The o.g. biergarten may have originated centuries ago in Germany, but today’s beer gardens have gone multi-culti with international brews that span Asia to North America. And with summer in full swing, there’s no time like the present to brush up on your cross-continental drinking skills. Check out these buzz-worthy beer gardens in Los Angeles and New York. Prost! (Or make that Cheers! Salute! Kanpai!)

Verdugo Bar  – Glassell Park, CA
If you’re a true brew connoisseur in LA, Verdugo is already on your radar. For the rest of us, it’s a hidden find with the most impressive list of obscure beers you’ve never heard of from places as far away as Norway and as nearby as Eagle Rock. (Last I checked they rotate about 65 different craft beers with 18 on tap.) The outdoor patio is by all accounts a beer garden with wooden benches and plenty of room to hang out. Music is always blasting and food trucks are almost always here–perfect for soaking up the suds. www.verdugobar.com

Tiato Summer Beer Garden – Santa Monica, CA
TGIF: Santa Monica’s best kept secret (it’s in the MTV/Lion’s Gate building) gets its brew on every Friday night 5pm-9pm through September 30. Tiato’s huge outdoor space becomes a beer garden with German and Asian beers available on tap and by the bottle, as well as some new bites like a trio of homemade sausages and the best fish sliders you’ve ever had. (They’re like a gourmet version of the Filet-O-Fish.) Also on tap: live music, DJs and a totally chill scene. www.tiato.com

Biergarten – Koreatown, CA
It was only a matter of time before Korea, Mexico and Germany had a love child. And leave it to the melting pot of Los Angeles, home of the Kogi Truck, to be the breeding ground. Although this busy strip mall joint gets major point deductions for not having an outdoor patio, it does get kudos for the 20+ beers on tap (many of which are German, but there’s also soju) and dishes that range from kalbi quesadillas and tacos to drunken chicken, peanut butter sliders and sea snail salad. www.biergartenla.com

Angel City Brewing – Los Angeles, CA
Never mind a bottle from Trappist monks. If you really want something exotic, how about a pint of Charlie Parker? Hit up this award-winning brewery during the weekly beer garden Thursday-Friday starting at 5pm and Saturday-Sunday from 2pm. Along with some classic fare like Italian sausages you can choose from 13 locally handcrafted beers like Angel City Ale and Rahsaan Roland Kirk Stritch Stout, both of which were awarded gold medals in the Los Angeles International Beer Competition. www.angelcitybrewing.com

La Birreria – New York, NY
Two words: Mario Batali. For all you sycophantic foodie junkies, that’s all you needed to hear. For the rest of us, it’s worth noting that this Italian beer garden on Eataly’s rooftop is truly a new take on the old biergarten with 10 draft brews, 28 bottled brews and four Italian cask brews (unfiltered, unpasteurized, naturally carbonated) that are hand-pumped just 30 feet from where you sit. And, of course, this being Batali’s Eataly, there’s tons of food. Salute! www.labirreria.com

Bohemian Hall & Beer Garden – New York, NY
What the heck! Who knew the oldest beer garden in New York City was Czech?! This hoary broad might’ve turned 100 years old last year, but damn if she doesn’t still have that sway. Dotted with giant umbrellas and tall trees, the theme-park sized patio really packs ‘em in thanks to the laidback vibe, live music, long list of Czech lagers like Staropramen and traditional dishes including knockwurst sausage, dumplings with mushroom gravy and chicken schnitzel. Interesting aside: You can actually take Czech language classes at the hall itself which is run by the Bohemian Citizens’ Benevolent Society of Astoria that supports the area’s Czech and Slovak communities. www.bohemianhall.com