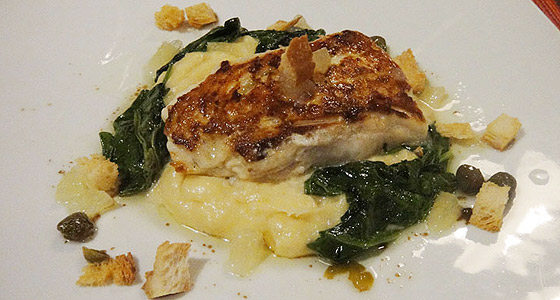 Looking for the best bites at LA’s hottest restaurants? Much like an album (remember those?), most restaurants serve up a few great hits that stand out from the rest of the menu and can be enjoyed over and over again. Whether it’s the perfectly crisped piece of thin-crust pizza or a delicious riff on vegetables (turns out there’s a lot of green on this list), find out where to go and what to order so you can get the best dishes being served in Los Angeles right now. Ready, set, go!

Salt & Pepper Calamari @ Tiato Cafe
Can calamari be exciting? And how! I’m not usually the one ordering the ubiquitous rubber band-ish appetizer (in fact, I didn’t order it the first time I tried it here), but wow! Leave it to Tiato, one of my favorite hidden finds, to knock this otherwise stale squid out of the park … or water, as it were. Delicately crisp yet far from greasy, addictively peppery yet not off-putting, the humble calamari has finally been done justice. And those grilled green onions really put it over the top. With chef Mama in the kitchen, the kids are alright.

Seared Halibut @ L’Epicerie
This charming Culver City newcomer offers a little taste of France and a whole lot of flavor with a certain seared halibut that’s served during dinner. Chef Sebastian Archambault (remember him from RH @ Andaz?) whips up the tastiest version of this flaky flatfish with creamy mashed Yukon Gold potatoes, capers, brown butter and lemon confit (i.e. soaked mini wedges that pop in your mouth and add the most cheek-squeezing burst of lemon to heighten the flavors). To take a lyric from The Who: “The best I ever had!”

Smoked Turkey @ Smoke City Market
Technically in Sherman Oaks but really in Van Nuys, this nondescript newcomer to the neighborhood is where to get some of the smokiest, meatiest, juiciest, tenderest, most ridonkulously savory meat in town. Specifically the turkey, which is smoked for hours overnight. Go early on the weekend if you can, ’cause when it’s gone it’s gone. And don’t forget the chewy mac & cheese and apple vinegar slaw that’s surprisingly not too tangy.

Bloomsdale Spinach Pizza @ Stella Rossa
Forget that overhyped, overcrowded ‘haute’ pizza joint off Melrose. (Seriously, it’s about time Pizzeria Mozza was dethroned, don’t you think?). If you really want your pizza mind blown you need to get over to the new Stella Rossa pizza bar and let chef Jeff Mahin and company rock your world. I’ve already tried four of the pies, which are cooked in a stacked oven at 650 degrees (!), and the crust is consistently crispy all the way through without that dreaded soggy sag in the middle. (That’s ’cause they let the dough ferment for at least 18 hours. These guys are hardcore.) The best one? Bloomsdale Spinach with crispy purple kale, pecorino, black peppercorn and a little olive oil. (And the wood-fired grapes and burrata while you’re at it.) You can thank me later.

Chicken Pozole @ Mas Malo
What can I say? Chef Robert Luna makes the best chicken pozole in town. (Aside from my grandma, of course.)  In fact, I’ve even ordered it to go and hand-delivered it to my grandparents just so they know that they have an option to making it themselves . Having achieved a supremely habit-forming level of ass-kicking spiciness, this Mexican stew of chicken, hominy and chili will heat you up and knock you out. Top it off with the shredded cabbage, radishes, onions, lime and oregano flakes, and you’re in East LA heaven.

Shredded Kale Salad @ The Misfit
Kale that’s exciting, WHAT?! Forget the bitter sandpaper reputation of this coarse cabbage. It’s gotten an entirely new lease on life thanks to chef Bruce Kalman who soaks the leaves in water and sea salt overnight before shredding them into fine long ribbons, tossing in a healthy dose of olive oil, sunflower seeds, random bits of fruit, golden raisins, and adding a few shavings of Midnight Moon cheese. Simply divine. Another must: farmers’ market peas. (They might not be on the menu, but ask for ’em anyway). Think farmers’ market English peas, pea tendrils, pea shoots, pea pods and purple basil mixed with olive oil and salt. This is the best way to eat your veggies, kids.

“Pass the Bread” Flight @ MB Post
OMG, who would’ve thought the best naan in the whole world would be found not in India but in Manhattan Beach??? (Okay, maybe that’s a bit of an overstatement, but this is certainly the best naan I’ve ever had in the United States, and certainly in LA county.) David LeFevre’s buoyant new South Bay spot is where to load up on carbs and not regret a single calorie.  Right at the top of the menu are the “Pass the Bread” options–order ALL of them: bacon cheddar buttermilk biscuits with maple butter (an unctous explosion of sweet & salty flavors),  fleur de sel pretzel with horseradish mustard (awesome kick) and grilled naan flatbread with harissa yogurt–the bread is thick and stick-to-your-mouth creamy while the dip is super spicy with a bright surprise of lime zest. Ridiculously good.

Fried Chicken @ Lexington Social House
At last! My enduring quest for fried chicken with a rich saturation of color and a supremely crunchy, spicy, thick skin has come to an end. Chef Mette William’s fried chicken–served with smashed potatoes, braised kale, and mustard sauce–has achieved the elusive task of making a gourmet version of Pioneer Chicken, far surpassing the original experience while simultaneously taking me back to the days of my childhood when the famed, now near-defunct chain was the pinnacle of this comfort food. SO worth the cholesterol.

Salmon Nigiri @ Sugarfish
Being in LA, everyone has their own opinion on where to find the best sushi. Well, now you have mine. Sugarfish. Doesn’t matter which one you go to. And it doesn’t matter that you’re not sitting at a cramped sushi bar with Nozawa himself cutting up the fish in front of you. (He picks all the fish anyway.) The salmon is consistently sweet, buttery and just a little nutty thanks to those sesame seeds. It doesn’t even need the homemade soy sauce. This nigiri melts in your mouth … and will melt your sushi-loving heart.

Shell-On Fava Beans @ Lazy Ox Canteen
More green stuff?!? Oh yeah. ‘Tis the season, people. I love that chefs are really trying to make veggies interesting and actually crave-worthy. We know Lazy Ox has some delish food and the tangy shell-on roasted fava beans with mint and garlic is the best $5 I’ve spent in a long time. (In fact, I spent $10 ’cause I couldn’t stop at just one order.) Sure, it’s work to get those damn shells off, but how ’bout working for your food for once?  The little gem lettuce salad with olives, citrus & cippollini vinaigrette is another must. Let’s hear it for produce!

Cucumber & Peppercorn Soup @ Fig & Olive
It’s a toss up between this sceney spot’s chilled cucumber & pink peppercorn soup and their chocolate pot de creme. (OMG is the pot de creme incredible–like sinking your spoon in a thick mass of chocolate-flavored butter and then smearing it on your tongue as it melts away.) But back to the soup. It’s got a somewhat grainy pureed consistency and refreshes with a blend of cucumber, mint, lemon, orange and green onion. Then there’s those red-hued peppercorns that sneak up on you. This soup is going to kick your mouth’s ass. In the best way possible. Don’t say I didn’t warn you.

Ahi Tuna Tacos @ Tommy Bahama Bar & Grill
Okay, so this Tommy Bahama Bar & Grill isn’t in Los Angeles. Who cares? When you’ve got chunky cubes of marinated ahi tuna tucked inside crispy fried wonton shells and topped with a palate-teasing mix of Asian slaw and wasabi-lime avocado the experience transcends county. Besides, it’s the perfect excuse to get out of dodge and hang out by a clean beach for a change. Each $8 trio proves that great things do come in small packages. Your only regret will be if you don’t order more.