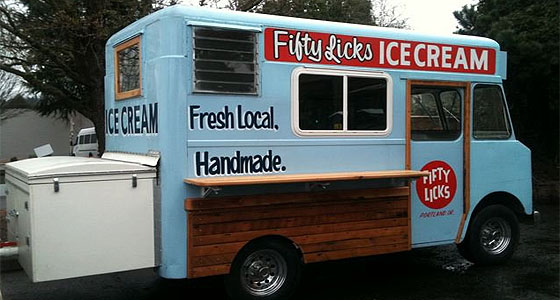 Lick, lick, hooray! If you’re tired of the same old vanilla ice cream experience, you’re in luck. Now that everyone’s a foodie and the quest for finding/creating/eating the next new thing is de rigueur, it was only a matter of time before ice cream got the weird flavor treatment. And with summer still here, it’s time to get in on some of the strangest flavors you’ve never heard of. From an ice cream in North Carolina that’s so damn hot you must sign a waiver before you even taste it to foie gras and Jesus Juice in San Francisco, check out these freaky frozen flavor bombs that are sure to mix up your mouth in the most delightful (frightful?) way.

Brown Bread Ice Cream @ Scoops
Los Angeles, CA
White bread is bad for you. But brown bread ice cream? Mmm mmm good. People drive from miles away just to get a taste of Scoops’ most famous flavor made with Grape Nuts cereal and caramel–read the 1,550+ reviews on Yelp if you don’t believe it–but this LA cult favorite has plenty of other flavors (including vegan and non-dairy) that change every day. Think strawberry balsamic black pepper, coconut wasabi, Guinness chocolate, even kimchi. Still don’t see what you want? Take to their flavor suggestion board and if they like it, they’ll try to make it. Look for daily flavors on Twitter at @scoopswestside.

The daily flavor board @ Humphry Slocombe

Foie Gras & Jesus Juice @ Humphry Slocombe
San Francisco, CA
Ah, sweet summer corn. It might conjure up images of cobs on the grill, but San Fran’s famed ice cream spot is taking this veggie to its creamiest, coldest conclusion for the season. If that’s not your thing, there are always 10-12 daily flavors such as peanut butter curry, salt & pepper, salted licorice, foie gras, Secret Breakfast (the most popular) made with bourbon and cornflakes and Jesus Juice sorbet (red wine and Coke). For the latest flavor updates, join the 313,700+ followers on Twitter at @humphryslocombe.

Cold Sweat & Exitwound @ Sunni Sky’s
Angier, NC
Forget cooling off with a cone. Sunni Sky’s ice cream shop is where to get dangerously hot ice cream. (Seriously. You have to sign a waiver before you can even sample the ice cream! Well, at least two of the 90+ flavors that are available every day.) The infamous Cold Sweat is a mouth-searing mix of vanilla ice cream, hot sauce and Thai, habanero and pequin peppers. If you can handle an entire spoonful of that–and they don’t suggest you even try if you’re under 18 or over 30–then you qualify for Exitwound, an even hotter version of Cold Sweat made with oleoresin. As in the stuff they put in pepper spray. “Oleoresin is diluted when it’s put into pepper spray. But we actually have jars of 100% pure oleoresin and just dump it into the ice cream along with ground up Thai, habanero and pequin peppers,” one of the store’s workers told me over the phone. “We had to sign a bunch of waivers to get the jars of oleoresin, which is why people have to sign a waiver before they sample the ice cream.” Hottt!

Lobster Ice Cream @ Ben & Bill’s Chocolate Emporium
Multiple locations, ME & MA
Considering its New England roots, it only makes sense that Ben & Bill’s would have created lobster ice cream. Yes, that’s right. Lobster ice cream. The guys buy cooked lobster meat from a local lobster pound, chop it up, butter it, and fold it into the ice cream. During peak season, it’s the most popular flavor both in-store and for shipping. (Are those chunks of pink tail and claw meat you see? Yes it is.)

DIY Ice Cream @ iCream Cafe
Chicago, IL
Talk about DIY. iCream Cafe in Chicago’s Wicker Park ‘hood is where crafty ice cream cravers can make their very own ice cream, frozen yogurt or sorbet right in the store. Rather than a coolor or soft-serve machine filled with pre-made flavors, there are individual stations where you can make your own frozen creation within minutes. Choose an ice cream (regular, light, soy, organic), yogurt or sorbet from about 28 different flavors (root beer, burnt sugar, cream soda, to name a few), then pick from a long list of toppings (you can even add color if you want) and voila! Your very own frozen treat. Aren’t you proud of yourself?

Breast Milk Ice Cream @ The Icecreamists
Covent Garden, UK
Excuse me, but did you say breast milk ice cream? Yes, it sounds absolutely disgusting, but leave it to the sly Icecreamists to put an eyebrow-raising spin on an otherwise completely non-controversial flavor. That is to say, their infamous Baby Googoo breast milk “vice cream” is simply the breast milk of a cow. Get it? But before you think these guys are just attention-seeking boobs, they’re whipping up plenty of other flavor combos like Choc & Awe, a 70% Ecuadorian dark chocolate ice cream; Sex Bomb, which is loaded with Brazilian stimulants; and Apocalypse Chow, an explosive blend of ginger, chili and lemongrass. Sounds udderly delicious, wouldn’t you say?

Maple & Bacon Ice Cream @ Fifty Licks
Portland, OR
Imagine crispy, nitrate- and hormone-free bacon piled high over stacks of maple syrup-drizzled pancakes. Now imagine it frozen into creamy maple ice cream sprinkled with crunchy bits of bacon. That’s the famed Maple with Bacon ice cream from Fifty Licks. Although not an ice cream shop like the rest of the places on this list, Fifty Licks does have a couple of trucks (you can always find one on the corner of SE 43rd and Belmont in Portland) serving up the bacon favorite as well as other flavors like Slabtown Whiskey. For the latest scoop you can follow owner Chad on Twitter at @Fiftylicks.

Teriyaki & Corn on the Cob @ Max & Mina’s
Flushing, NY
Forget teriyaki chicken. How about teriyaki ice cream? This famous spot does most of its business for special-order accounts, but the adjacent shop is where you can choose from some 60 different flavors (like teriyaki) on any given day. “It’s pretty much potluck,” one of the store’s staff members told me over the phone. “We have about 5,000 flavors, but whatever we make for our wholesale accounts at the moment is what we offer in the store. Like right now we’re making macaroon, so that’ll be in the store in a day or two.” Also on hand: corn on the cob, black licorice, Champagne, Bordeaux and Twix Ahoy, a mix of Twix candy bars and Chips Ahoy cookies. It’s like having dinner and dessert in scoop form.