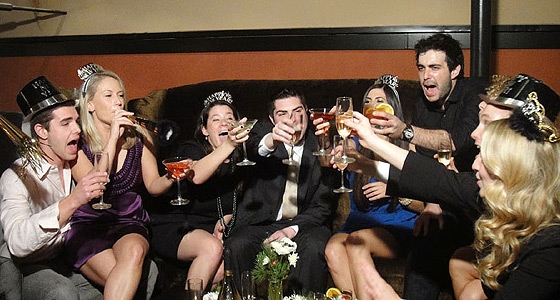 Happy New Year! The countdown has begun yet the question remains: Where will you spend your final moments of 2010? Check out these top 7 spots for ringing in the next decade in style and with a smile.

The Glendon Bar & Kitchen – 1071 Glendon Ave, Westwood, CA 90024
It’s the first time the Glendon Bar & Kitchen in Westwood is having its first New Year’s Eve party with a Rat-Pack era theme party, so come in your best glam getup for a Sinatra-style good time. Two seatings are offered ($58-$68), but get this: For $30 after 10 pm, you’ll get open bar all night and live music. Cheers!  www.glendonla.com

Chaya Downtown – 525 S. Flower St, Los Angeles, CA 90071
All Chaya locations will be doing something special for New Year’s Eve–Beverly Hills is doing a Roaring ’20s party and Venice is keeping it French–but you can’t beat downtown. Get whisked away to the Orient with Chinese lion dancers, music and a four-course dinner (offered continuously from 5pm-10pm, $75), Omakase Sushi Lover’s Special ($65) at the sushi bar, or la carte menu.  www.thechaya.com

Universal Citywalk – 1000 Universal Studios Blvd, Universal City, CA 91608
This mall theme park is hosting its annual Countdown Bash, which is perfect for families and the budget-minded. The free event (just pay $10 for parking after 5pm) will have two stages of live music along with DJs spinning music, giant video screens, multiple fireworks shows, and plenty of places to eat.  www.citywalkhollywood.com

Downtown Long Beach – Rainbow Harbor and Pine Ave
There’s gonna be dancing in the street in Downtown Long Beach come New Year’s Eve. The free street party returns to Pine Avenue and along Rainbow Harbor with multiple stages featuring live music and DJs, an East Coast and West Coast countdown, plenty of food and booze to buy and a view for the midnight fireworks off the Queen Mary.  www.dlba.org

Egyptian Theatre – 6712 Hollywood Blvd, Hollywood, CA 90028
Cleopatra lives at this Hollywood bash at the historic Egyptian Theatre. Lounge in the tented outdoor courtyard or dance in any of the themed indoor rooms where DJs will be spinning Top 40 and hip-hop mash-ups against a giant LED light show. A balloon and confetti drop will launch at the stroke of midnight. General admission $25-$40, VIP tickets $75-$100, including open bar.  www.cleopatrasnewyear.com

Woodland Hills Ice – 6100 Topanga Canyon Blvd, Woodland Hills, CA 91367
Got kids? Take ‘em to the family-friendly outdoor Woodland Hills Ice rink at Westfield Promenade. From 6pm-1am, the $25 NYE special includes skating, skate rental and choice of hot dog or hamburger, chips, drink and dessert. You can watch the ball drop at 9pm (for those on East Coast time) and again at midnight.  www.woodlandhillsice.com

The Edison – 108 West 2nd Street, Los Angeles, CA 90012
Ring in 2011 at Downtown LA’s best underground (literally) speakeasy with the Yard Dogs Road Show, a traveling cabaret of performers that does a little of this (vaudeville, burlesque) and a whole lotta that (stage magic and more than a few surprises). Tickets are $75 and include a champagne toast and desserts. Sweet!   www.edisondowntown.com