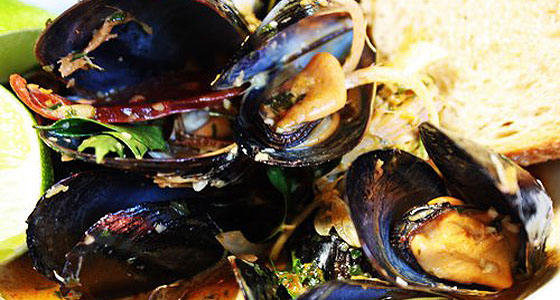 A Mayan Apocalypse replete with fire dancers, go-go boys and warrior sacrifices? A Moulin Rouge cabaret that will transport you to 19th century Paris in the middle of LA? An extravagant ball with Cleopatra herself? Yes, kids. It’s New Year’s Eve in Los Angeles. So if you didn’t get enough role-playing at Halloween or just want to send off 2011 with a bang, here’s where to go for New Year’s Eve in Los Angeles, conveniently listed in two categories: Parties and Dining. Be sure to check back often as I’ll be updating this often.

The Abbey – West Hollywood
It’s the end of the world as we know it … and you’ll feel fine. Leave it to the Abbey, the “world’s best gay bar,” to put a wacky spin on the end of the Mayan calendar. The big Apocalypse 2012: Party Until the End of Time is where you can say good-bye to the planet with an extravaganza of fire dancers, go-go warriors and yes, Mayan sacrifices. (Don’t expect any virgins though … this is the Abbey, after all). VIP packages start at $100 including hosted bar, appetizers and champagne toast at midnight. More info: www.theabbey.com

Moulin Rouge Spectacular – Los Feliz
Forget Paris. If you want to spend a night at the Moulin Rouge, you can do it on New Year’s Eve when Vermont Kitchen & Bar, Rockwell and Barre VT transform their spaces into a multi-sensory experience of music, food, dancing, drinking and live art. Three dinner and performance seatings will be presented throughout the evening with entertainment from the cast of  “For the Record: Baz Luhrmann” as well as complimentary absinthe tastings, rooftop cigar lounge, can-can girls, live sketches by Toulouse-Lautrec and a French-inspired dessert bar. Costumes or black tie encouraged. Prices start at $157 per person and include all tax and gratuity. Enter the code “SATINE” for a 45% discount until December 24; same code provides a 25% discount after December 24. More info: www.showatbarre.com

Rock out @ the Roxy

The Roxy – West Hollywood
The Roxy will be rocking in the New Year in true Sunset Strip style with a Love Battle Royale. The multi-band bill going on at the Roxy when bands hit the stage including headliners Warner Drive and Semi Precious Weapons. The party starts at 7:30pm. General admission tickets $25; VIP tickets $45. More info: www.theroxyonsunset.com

Basement Tavern – Santa Monica
This subterranean speakeasy-ish spot beneath/behind the historic Victorian is hosting a three-story New Year’s Eve bash, complete with two bands and a DJ. Paul Chesne will be playing at Basement Tavern, Howlin’ Woods are playing in the Attic Bar of the Victorian, and DJ Oscar Rangel will be on the main floor. Tickets are $25 and presale wristbands can be purchased anytime at BT. More info: www.facebook.com/basementtavern

Walt Disney Concert Hall – Downtown LA
For an evening of class and sass, check out New Year’s Eve with Pink Martini, the 12-piece multicultural group that will transport you to the middle of a samba parade in Rio de Janeiro to a romantic ‘30s Parisian cafe all from a single stage. There are two performances (7pm and 10:30pm) with tickets starting at $78. FYI: If you want to eat before (or after ) the show, the adjacent Patina Restaurant is hosting three NYE seatings at 4:30pm, 7pm and 10pm. More info: www.laphil.com & www.patinarestaurant.com/holidays

Egyptian Theater – Hollywood
It makes sense that the Egyptian Theatre is where you can usher in 2012 with Cleopatra and her court(yard). Cleopatra’s New Year’s Eve Ball takes place in the theater’s courtyard as well as indoors with food stations, VIP open bar, DJs spinning Top 40 and hip-hop mashups to a giant LED light show and a midnight balloon drop and confetti blast. Party is 9pm-2am with tickets starting at $75. More info: www.cleopatras.eventbrite.com

Hollywood & Highland
If your idea of ringing in the New Year with a bang includes hanging out with AC Slater (well, not really hanging out, more like watching) along with thousands of your closest friends, then check out the Big Bang New Year’s Eve celebration at Hollywood & Highland featuring 15 DJs, celebrity guests and live performances by Lupe Fiasco and Cobra Starship. More info: www.bigbangnye.com

Taberna Mexicana- Beverly Hills
How’s this for ringing in a prosperous New Year: Head over to Taberna Mexicana for the delicious food—no pricey prix-fixe here, just the regular menu with can’t-miss dishes like octopus carpaccio, chicken albondigas, chile relleno and tres leches cake with blowtorched marshmallow—and get a FREE $25 gift card! This also goes for anyone who dines in on New Year’s Day, too. More info: www.tabernamexicana.com

Mezze – West Hollywood
All you can drink for $35? Yes, please! From 11pm-2am, Mezze is turning their beautifully dining airy space into a dancing and drinking hot spot with an open bar for only $35. But before you do that, consider making a dinner reservation. The $65 meal includes plenty of small plate options like the famed shawarma and cauliflower flatbread with seatings from 6pm-8:30pm and 8:45-11pm. More info: www.mezzela.com

First & Hope – Downtown LA
This chic downtown bistro has three packages to make sure you celebrate New Year’s Eve in style: American in Paris ($50 including reserved seating in the Fedora Room), Swell-E-Gant Dinner ($85) and An Affair to Remember ($112, which includes access to the Fedora Room, which will have French cabaret and burlesque). Bonus: each package includes food, drinks, live music, countdown, champagne toast and an “Auld Lang Syne” sing-along at midnight. And if you’re dashing off to the theater, you can reserve your table starting at 4pm through 6:30pm with an a la carte menu of classic choices like Oysters Rockefeller,  Lobster Thermador and Steak Diane. More info: www.firstandhope.com

Rush Street – Culver City
For fun on the cheap, check out the New Year’s Eve party at Rush Street. There’s no cover charge and dinner specials 5:30pm-10pm (reservations recommended). Starting at 8 pm, the upstairs lounge (you know, the one with the stripper pole) is offering bottle service on the couches for $400 (4-8 people), or $150 per table for 2 (reservations required). You can also do the bottomless Bloody Mary and Mimosa brunch on New Year’s Day. No hangover required. More info: www.rushstreetculvercity.com

Crustacean – Beverly Hills
Celebrate NYE around the world at Crustacean, which will be streaming the most spectacular international New Year’s Eve festivities along with live entertainment featuring Brazilian dancers, DJ, pop violinist Yennie Nam and themed cocktails. The party starts at 3pm with the Beatles taking you for a stroll down Abbey Road, samba dancing at Copacabana Beach at 6pm, the big crystal ball drop in Times Square at 9pm and a Beverly Hills toast at midnight. An a la carte menu is available 12pm-9pm and a prix-fixe final seating begins at 9pm for $189. More info: www.anfamily.com

Hotel Casa del Mar – Santa Monica
For a festive and upscale affair, Casa Del Mar is preparing a special menu with lots of options including oysters, lobster and filet mignon. There are two seatings–7pm for $85 and 8pm for $185 including champagne toast and party. If you don’t want to do dinner, you can also just party in the Lobby Lounge for $40 with music by Aejay’e & The Full Spectrum Band. More info: www.hotelcasadelmar.com

Street – Hollywood
If dancing in the streets for NYE isn’t exactly your style, then maybe eating at Street is. Susan Feniger’s multi-culti ode to street food is serving up a $55 six- course menu with everything from Bolivian shrimp chowder to Malaysian curried short ribs, plus complimentary champagne and cocktails at midnight. As always, vegetarian/vegan options are available. More info: www.eatatstreet.com

Shore Hotel – Santa Monica
For a magical NYE celebration, spend the night poolside with renowned “close-up” magician David Minkin (FYI, he’s one of Johnny Depp’s faves) at the recently opened Shore Hotel. The intimate affair includes an hour of wine tasting from Rosenthal’s Malibu Estate accompanied by cheese and charcuterie, followed by one hour of magic. Early Show is 7pm-9pm; Late Show is 9:30pm-midnight with champagne and sweet treats. Tickets are $85 including tasting and show. Reservations required as space is limited to 30 people. More info: www.magicandwine.com

Sol Cocina – Newport Beach
SOL Cocina is inviting guests to celebrate their New Year’s Weekend without the fuss of leaving Orange County or making elaborate plans. There’s a special New Year’s Brunch on both Saturday and Sunday from 10am-3pm with Mexican brunch specialties and bottomless mimosas and for NYE, expect chef’s specials along with the regular menu + a champagne toast at midnight and live DJ. More info: www.solcocina.com

Ra Pour – Rancho Cucamonga
So you’re in the Inland Empire, huh? You don’t have to drive to LA for some NYE action. Ra Pour, a sleek restaurant and lounge in Rancho Cucamonga’s Victoria Gardens, is ringing in the New Year with a three-course dinner at three different seatings: 5pm-7pm for $49; 7pm-9pm for $49; and 9:30pm to close for $74, including champagne toast. More info: www.rapourrestaurant.com