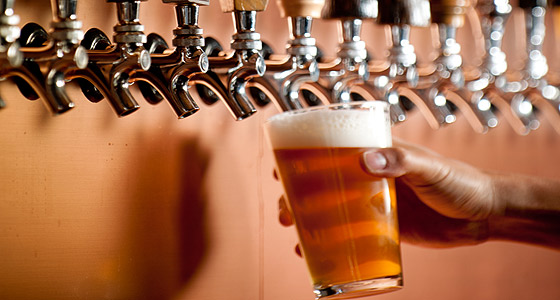 Steins brimming with beer. Chicks baring boobs in dirndls. Grown men dancing in lederhosen. And lots of sausage and strudel. Yes, folks, Oktoberfest is here. Which, in the grand American tradition of celebrating foreign holidays, means one thing: It’s time to booze it up! The biggest event might be going on in Munich, but there are plenty of places around LA, OC and the IE that are getting German with it. So raise a glass and get ready to oompah your way through the month.

Oktoberfest @ Alpine Village – Torrance
SEPT 23-OCT 23: Alpine Village is the largest and longest running Oktoberfest celebration in Southern California. Going on every year since 1968, this permanent taste of Bavaria has a restaurant, bar and import shop all year long, but for seven weeks during September and October the place is all about Oktoberfest with oompah bands flown in direct from Deutschland, German bier, crazy chicken dancing and homemade bratwurst and Polish sausages. Tickets $5 to $20; costumes encouraged. www.alpinevillagecenter.com

Oktoberfest Table Tap Take-Over @ City Tavern – Culver City
DAILY UNTIL OCT 2: In honor of Oktoberfest, City Tavern’s self-serve table taps (50 cents per ounce) will carry only true Munich Marzen beers along with plenty of comfort food from the menu. Guests who are able to snatch up a seat at the table tap booths on October 2nd will receive a commemorative growler. www.citytavernculvercity.com

Hollywood OktoBEERfest @ Egyptian Theatre – Los Angeles
MON OCT 3, 5PM: It’s all about the beer at this theatre located between Pig N’ Whistle & Maui & Sons. There will be 32-ounce premium beer servings, brats and live music 5pm-7pm with a DJ and dancing closing out the night. www.americancinematheque.com

Oktoberfest @ Wirtshaus – Los Angeles
DAILY UNTIL OCT 8: In honor of Oktoberfest, this new spot on La Brea has transformed its ping-pong room into a tented space with communal picnic-style benches and tables. Expect live music on Fridays and Saturdays with specials on German beer and menu items like sausage, schnitzel, potato pancakes and pretzels. www.wirtshausla.com

Oktoberfest 2011 – Big Bear
EVERY SAT-SUN UNTIL OCT 30: Put on your polka face, people! Big Bear’s 41st annual Oktoberfest promises to be bigger and better with tons of food (everything from brats and sauerbraten to pretzels and pickled pigs’ feet), an expanded beer garden with large-screen TVs broadcasting the games, live music from Die Mainfloesser Band from Germany, Die Trachten Verein Traunstoana dance group from Austria and a special “Local’s Night” on October 7 with $3 adult admission (free for seniors & children) and “German Spooktacular” on October 29 with costume contests for both adults and children. FREE BONUS: A complimentary O’Doul’s Shuttle (6pm-1am) runs every Saturday night and will take you door-to-door anywhere in the Big Bear Valley. Tickets: Saturdays $10, Sundays $5, Children under 12 free. www.bigbearevents.com/oktoberfest

Oktoberfest @ Phoenix Club – Anaheim
EVERY FRI-SUN UNTIL OCT 30: Pig and ox on a spit? Oh yeah, this’d be the place. The huge Oktoberfest celebration at the Phoenix Club is delivering the German goods not only with rotating meat (October 2 and 30 will feature a pig on a spit while October 9, 16 & 23 will have an ox on the spit) and plenty of beer, but also with plenty of family-friendly fun ranging from bounce houses, Bavarian dance group Die Gemütlichen Schuhplattler and Skip Banks “The Balloon Man” to train rides, music and other entertainment. During the last three weekends, the Froschhaxn Express will be performing direct from Germany. For coupons and more details about the weekly attractions, check the venue’s website and subscribe to the newsletter.  www.thephoenixclub.com