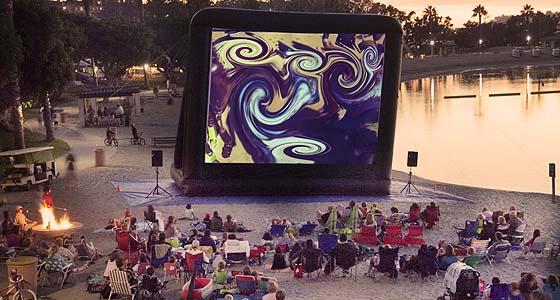 If there are two things that Angelenos love it’s enjoying our fabulous weather and watching a good movie. So it’s no wonder that outdoor movie-watching has become a summer tradition here in Los Angeles. And the list for these al fresco film nights seems to grow every year, most of them free of charge. So whether you’re looking for a cinematic experience in the cemetery (only in LA, right?) or want to kick it old-school at a real drive-in theatre (remember those?), here’s a quick hit list for some of this season’s can’t-miss outdoor movie experiences.

Cinespia in the Cemetery – Hollywood
SATURDAYS THROUGH JULY 28: Only in LA can you watch the stars under the stars while quite possibly sitting on top of the stars. That’s because Cinsepia has created what has become one of the most popular summer traditions with its movie screenings at the Hollywood Forever Cemetery. Every Saturday night in June, Cinespia projects movies on the wall of the Cathedral Mausoleum, itself home to many deceased gods and goddesses of the silver screen, while folks camp out BYOP style. (Bring Your Own Picnic, for the uninitiated.) www.cinespia.org

J.A.M. Sessions – East LA
FRIDAYS THROUGH AUGUST 24: Who says you need money to have a good time? Starting on July 6, JAM Sessions (Jazzed and Motivated, a program sponsored by Ford Theatres) returns to the East LA Civic Center Amphitheatre every Friday night. The event offers free dance and music lessons–ranging from salsa to hula, accordion to drumming–followed by a free movie in the park. Bring a picnic and lawn chairs and get ready for a fun family night. www.fordtheatres.org/events

Old Pasadena Film Festival – Pasadena
THURSDAYS, FRIDAYS & SATURDAYS THROUGH JULY: This free four-week movie series is the largest free outdoor film festival in Southern California. This unique district-wide festival showcases a variety of genres that aims to reflect Old Pasadena’s historic downtown area. There are more than 100 restaurants in the neighborhood, all concentrated within 22 blocks, so grab a bite before, after or even during your movie.
www.oldpasadena.org/filmfestival

Street Food Cinema – Exposition Park
SATURDAYS THROUGH SEPTEMBER 1: One of the best outdoor movie events this summer, Street Food Cinema at Exposition Park is not only your chance to watch your favorite guilty-pleasure movies on the screen, but you can also see some of your favorite old-school stars up close and personal. Along with the outdoor movie, guests can expect live music performances every Saturday, a rotating roster of food trucks and on some nights, special guest appearances by folks like, say Corey Feldman (and his band) during the Saturday, July 14 screening of “The Lost Boys” and Deborah Foreman from “Valley Girl” who’s hosting a special 80s Double Feature on Saturday, August 18. www.streetfoodcinema.com

Hollywood Roosevelt Hotel – Hollywood
MONDAYS THROUGHOUT SUMMER: Cure your Monday blues with a movie and some booze at the Hollywood Roosevelt’s weekly poolside screenings at the Tropicana this summer. Each weekly movie starts at sundown (around 8:30pm) and will include special guests, movie-themed cocktails and $8 bites based on which film is being shown (everything from “The Big Lebowski” to “Splash”).  www.thompsonhotels.com/hotels/la

Eat. See. Hear. – Various locations
SATURDAYS THROUGH SEPTEMBER 15: From North Hollywood to San Pedro, this roaming outdoor movie, food truck and live music series changes location every week so you’ll never have to drive far to have a fun Saturday night. Movies include Gen X favorites like “The Wedding Singer” and “Dazed and Confused” while eats and drinks feature some of the best food trucks along with pours of LA’s newest craft beer, Golden Road. www.eatseehear.com

Movies on the Green – Woodland Hills
SATURDAYS THROUGH AUGUST 25: It’s all about family fun when Movies on the Green returns to Warner Park every Saturday from July 14 through August 25. Bring a blanket and a picnic, enjoy the free concert starting at 7pm and then kick back for the family-oriented films projected on a 30-foot screen with surround sound. www.valleycultural.org/concerts-movies

Oscars Outdoors – Hollywood
FRIDAYS & SATURDAYS THROUGH AUGUST: And the Oscar goes to … the Academy’s new open-air theater, located on the Academy Hollywood campus on Vine. Bring a blanket (and your appetite) to this latest addition to outdoor movie watching because along with each screening there will be food trucks tailored to match the theme. (Think comfort food for “The Goonies” or “Ferris Bueller’s Day Off.”) General admission is $5 or $3 for students and Academy members. Free onsite parking. www.oscars.org/events-exhibitions/outdoors

Moonlight Movies on the Beach

Mission Tiki Drive-In – Montclair
NIGHTLY YEAR-ROUND: Located halfway between the 60 and 10 freeways is where you’ll find this tiki-rrific movie-watching blast from the past. Featuring first-run movies seven nights a week, the Mission Tiki Drive-In is one road trip worth the drive. Bonus: Every Sunday night in August it’s “Classic Movie Nights” with old-school favorites “Bonnie & Clyde,” “Lolita,” “Viva Las Vegas” and “To Catch A Thief” playing on the big screen. It’s just $1 per car load. www.missiontiki.com

W Los Angeles – Westwood
SATURDAYS THROUGH AUGUST 26: The W Los Angeles-Westwood hotel is once again hosting movies under the stars at The Backyard with flicks like “Fletch” and “Labyrinth” plus cocktails and food available for purchase. Doors open at 7pm and all screenings start at sundown. There will also be a sneak peek of ABC Studios’ fall programs with chances to win special prize packages each week. www.wlosangeles.com/movienight

Moonlight Movies on the Beach – Long Beach
MONDAYS & TUESDAYS THROUGH AUGUST: A good mix of adult-oriented fare (“Drive,” “Annie Hall” and “Easy Rider”) and family-friendly fluff (“Puss in Boots,” “Wizard of Oz”), the free Moonlight Movies on the Beach returns to Alfredo’s Beach Club on Granada Beach with plenty of free parking plus snacks and BBQ available for purchase. www.alfredosbeachclub.com

Movies in the Park – Long Beach
MONDAYS, WEDNESDAYS & FRIDAYS THROUGH AUGUST 31: This series of free movies returns to multiple parks throughout Long Beach starting at dusk. Expect kid-friendly films like “The Adventures of Tin Tin,” “Spy Kids,” “The Muppets” and “Kung Fu Panda II.” Be sure to bring along a blanket, lawn chairs and a picnic. www.longbeach.gov/park/movies_in_the_park.asp

Rooftop Summer Film Festival – Beverly Hills
TUESDAYS THROUGH SEPTEMBER 25: Tuesday is the new Thursday this summer at the Thompson Beverly Hills. Starting at 7pm on Tuesday nights (movie starts at 9pm), the hotel is opening up their rooftop pool deck for movie watching with select screenings preceded by special guest Q&As moderated by the Hollywood Reporter. Films range from “When Harry Met Sally” to “Reality Bites” and “A Fish Called Wanda.” Ticket price is $20 per person, which includes a small popcorn and soda. You can also order from Caulfield’s full menu or from the special “Directors Cut” menu featuring clever food and drink pairings fit for two such as the “Scorsese” — burrata & peppers, NY strip steak, fries and a bottle of red. www.caulfieldsbeverlyhills.com/filmfest

Vineland Drive-In Movie Theatre – City of Industry
NIGHTLY YEAR-ROUND: One of the last drive-in theatres in the LA area, Vineland Drive-In plays first-run movies seven nights a week. Gates open at 7pm, shows start at dusk. On Friday, Saturday and Sunday nights the first feature is repeated after the second feature is over. All films are broadcast in FM Dolby Stereo sound. Ah, the good old days. www.vinelanddriveintheater.com

Newport Dunes Resort – Newport Beach
FRIDAYS & SATURDAYS THROUGHOUT SUMMER: Movies on the beach are back this summer at Newport Dunes Waterfront Resort with a new super-sized screen. The public is invited to pull up a beach chair or towel every Friday and Saturday evening through Labor Day weekend and enjoy popular family films. Concessions are available as well as food from Back Bay Bistro for dining in or takeout. Parking is $10. www.newportdunes.com