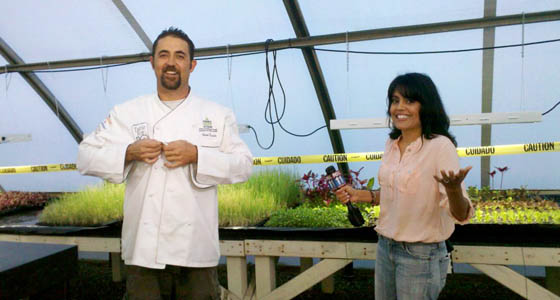 Never mind Old McDonald. Future Foods Farm is truly the future of farming. It was created by chef/farmer Adam Navidi, who is using organic aquaponic farming, a food production system where the fish feed the plants, the plants clean the water and then the water is recirculated back to the fish. It’s incredibly sustainable, efficient (it uses very little water), uses no chemicals or synthetics, and can be done anywhere–on a rooftop, in the middle of a desert, a city .. or in this case, an oil field in Brea! The location kinda freaked me out at first, but as soon as I saw what was going on inside these greenhouses, I had to share it with everyone. Navidi has only been doing this since January 2012 and has already begun a major expansion to use as much of the 65 acres of land as possible. To check it out for yourself, visit the FFF website and get tickets to his Saturday night farm-to-table dinners and tours.

So how’d you get the idea to do this … in the middle of oil fields?
Well, I was doing it in my backyard for a little while and had a couple of systems growing on the roof of my house as well. Then I got a place across the street where I was leasing out a couple of greenhouses for about a year and then this spot became available. What I was really trying to do was do this in a restaurant, but there were all sorts of zoning laws that wouldn’t allow me to do it. So I thought since I know how to do this and it’s the most efficient, sustainable farming method in the world, why not just have a farm?

How big do you want it to get?
Well, there are close to 65 acres out here, so I plan to build more greenhouses and providing organic, sustainable fish and produce to the whole community.

And because of the area you’re in, you can’t farm the land.
Right, it’s not possible. You can’t have tractors out here or digging up or planting in the ground because of all the underground pipes and such, so it’s like, what do you do with this land?

Do you know how long these oil wells have been in this location?
They’ve been here for a long time, I think since like the 1800s. [Note: The first recorded well on the field, and the one considered to be the discovery well, was drilled in 1880.] People would come here from all over Southern California because Brea was known as a place where tar seeped from the hills. People would use chunks of it to put in their lanterns and that’s how they lit their homes.

Is the Styrofoam system a new technique that a lot of farmers are using now?
No, I created that, I was the innovator on that. I actually patented it. It was just another way to reuse Styrofoam boxes from the kitchen. I was looking for insulated beds because regular plastic reservoirs that you find in hydroponics, for instance, are not insulated. So the water is only getting heated from the outside temperature. But with this I’ve figured out a way to solve that problem.

Were you an engineer before you became a chef? How’d you think of that?
No, no, but it’s in my blood. My father was an engineer and my uncle was an aquaculture scientist for the state of California and he also had an avocado farm in Escondido, so it was something I grew up being interested in for sure.

So tell me about your organic tilapia fish farm. Why tilapia?
Well, it’s a very hearty fish and it’s been around in Southern California for so long long it’s considered native to the area. But it has to be a certain type of tilapia. Most of the tilapia you see in the store is from Asia.

The name of your farm is Future Foods Farm. Do you think this is truly the future of farming?
Yeah, we’re doing it out here like this. But what’s great about this farming method is that this can be done anywhere. It’s urban farming at its best. This can be done against the side of a building; this can be done in the middle of the city. There are just so many different ways and places this can be done.

Does it cost a lot of money to keep this going?
There are some people who believe that aquaponics wouldn’t be cost effective enough for growing produce but I found a way of doing it – aka with some of the boxes that don’t recirculate – but we’re actually going to be putting in some really big systems in the next week or two. You know, I spend a lot of time just thinking about how to be efficient … like, thinking about something I can just fill up with water and walk away and come back three days later and there’s a whole head of lettuce or a couple hundred heads of lettuce that are grown.

Where does your food go?
It goes to different farmers’ markets around town. It also goes to a lot of the high-end restaurants in Orange County.

So you’re producing enough that you can provide these restaurants with your food?
Oh yeah. And as we get more and more demand we’ll just keep building more and more systems.

For the farm-to-table dinners that you do on Saturday nights, do you only serve what you grow on property or do you include other items as well?
Yeah, we bring in other things but everything we do is local. We use New Frontier chicken from Ontario, the mushrooms are local, everything is local.

And everything you grow is organic, correct?
Yes. That’s the great thing about aquaponic farming. As a consumer when you eat produce that’s been aquaponically raised you automatically know that it’s organic, that there aren’t any chemicals in it. When you have an organic farm they can still spray something and you might now it because the plant is not so sensitive to it. Whereas with us, if we spray the plants it would automatically go to the fish tank and because the fish are more sensitive than plants, I don’t want to risk, as an aquaponic farmer, killing a couple hundred thousand dollars’ worth of tilapia just to save a few plants from some bugs.

Yeah, I saw that you use natural methods for insect control with the yellow tape covered in molasses.
Yeah, the bugs are drawn to yellow and the molasses and honey. Plus honey brings the bees in too and they don’t stick to it, they just eat it up. But we have praying mantis, ladybugs and right now we have these little beetles. We also have little wasps that eat all the aphids and white flies.

What about the discarded salad bars, like the kinds you see at a Sizzler?
Yeah, this company was just going to throw them away and I just happened to be there and they said, ‘Do you want these things?’ and I said sure. And at that time I was looking for insulated beds and it just made sense. So I brought ‘em home and started making some systems and they worked really well, so there you go.

So do you now have relationships with different restaurants or stores that give you or sell you their old Styrofoam boxes that would otherwise end up in a landfill?
Yeah, exactly. That’s what we want to continue doing. We pick up the discarded boxes when we deliver our produce, so it works out really well.

So does the future look bright for this kind of farming?
Yeah, I think so. As we grow we’ll get more people and just keep doing what we’re doing and improving upon it. I’m really looking forward to what’s to come.