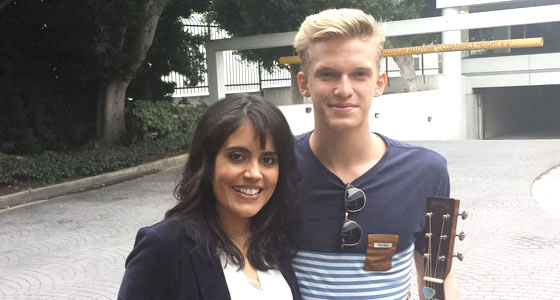 I admit it. Before I booked him to perform on “Good Day LA,” I had never heard of Cody Simpson! I mean, he is a little younger than my demo, but as I started researching, I quickly realized this kid is a full-on teen sensation with more than 6.5 million fans on Twitter and Facebook each!!! He gave me an exclusive interview about life on the road and here in LA, so check it out.

Speaking of major celebs, I had famed photog Douglas Kirkland stop by the studio to show some of his most iconic photos including the Judy, Audrey and Marilyn. As he said, there’s a story behind each picture and the stories he told me were incredible. For instance, that picture of Judy Garland with the tear running down her face, that was real. He was asking her about her childhood and she started talking about how she was constantly working as a kid with hardly a day off and how her handlers are the ones who got her hooked on “uppers and downers.” The tears just started rolling and Douglas started shooting. Wow. He also took that most iconic photo of Marilyn Monroe naked under the sheets. He said that was her idea. She enjoyed her sensuality and wanted people to be pulled into it. He also said there were many different Marilyns. One day she’d be happy and present, the next she’d be depressed and show up two hours late. I could talk to Douglas all day, but he was on his way to Chile to do the cinematography on the upcoming movie about the coal miners with Antonio Banderas.

And let’s not forget Dog Haus in Pasadena with their hot dogs and sliders, all made with that super soft and sweet Kings Hawaiian bread – it was indeed a good day!