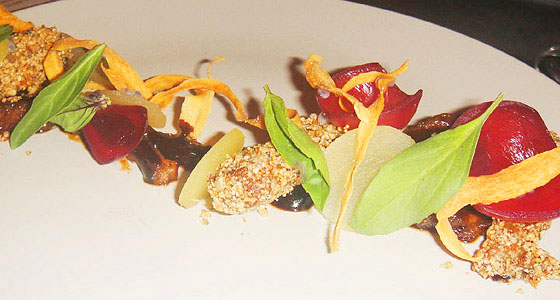 Red alert! I finally made it to Red Medicine, the ruckus-rousing restaurant that opened in December 2010 and famously ousted LA Times food critic S. Irene What’s Her Name by posting her photo online and declaring that she’s not welcome at the restaurant. That move invoked no small amount of controversy, name calling from both sides of the door, and, let’s face it, priceless publicity.

Not that Red Medicine needed any such antics. Not with Jordan Kahn in the kitchen. He of the famed “Jackson Pollock” white chocolate cubes, of the remarkable pastry pedigree that spans The French Laundry, Per Se, Alinea, Varietal, and XIV.  I became an instant fan when I first experienced his edible pieces of surreal, sublime art when he was pastry chef at Michael Mina’s XIV. (In fact, I had every single dessert on the menu and it’s still among my more memorable dining experiences.)

Needless to say, I was excited and curious to see how Kahn’s segue into Vietnamese-inspired savory would pan out, so to speak.  Along with a group of other writers, I was invited to a dinner hosted by Apothic Red, a cool new California wine made from a triad of Syrah, Zinfandel, and (gasp!) Merlot. (A lively conversation with Apothic winemaker Boyd  Morrison proved to offer fun predictions of where the much maligned third grape might end up … “Sideways” backlash seven years later??)

I’m not much of a drinker, but the wine seemed to pair well enough with the dishes. And, of course, the food is what interested me most. The meal started with what I soon decided were the most delicious chicken dumplings I’ve ever tasted (pictured above). Made with carmelized sugar, lemongrass, and pork fat (surely the not-so-secret weapon of their flavorful juiciness–incredibly, I didn’t notice that was an ingredient before digging into three of the suckers!–the dumplings are served alongside mint leaves, crispy onions, cucumber and plum/srichacha sauces, as well as a jar of butter lettuce leaves. It reminded me of the chicken lettuce cups at P.F. Chang’s. Only much better. And fancier. (Admittedly, I love P.F. Chang’s lettuce cups.)

John Dory in all its Glory

The set menu was comprised mostly of meaty stuff (not interested), but it all looked pretty. Oyster mushrooms mixed in oyster sauce with haricot vert and topped with a brioche crisp were earthy and tangy, but the real stunner of the night was the John Dory, served in the most delectable broth of brown butter-soy milk, verbena, pomelo and garnished with lettuce stems. Are you kidding me?! It was the best fish experience to top my last great fish experience, which was the grilled salmon in white truffle beurre blanc at Charlie’s in Malibu.

As for dessert … well, let’s just say I did everything but lick the plate to finish off that wonderfully weird, smooth and grainy, sweet and salty concoction of bitter chocolate with kecap manis, oats, parsnip (!), brown butter, and soy milk sorbet. Kahn did it again. And I can’t wait to go back for more.

Whip It: Angel City Derby →
← Up in Your Grille
Search Marpop
Recent Posts