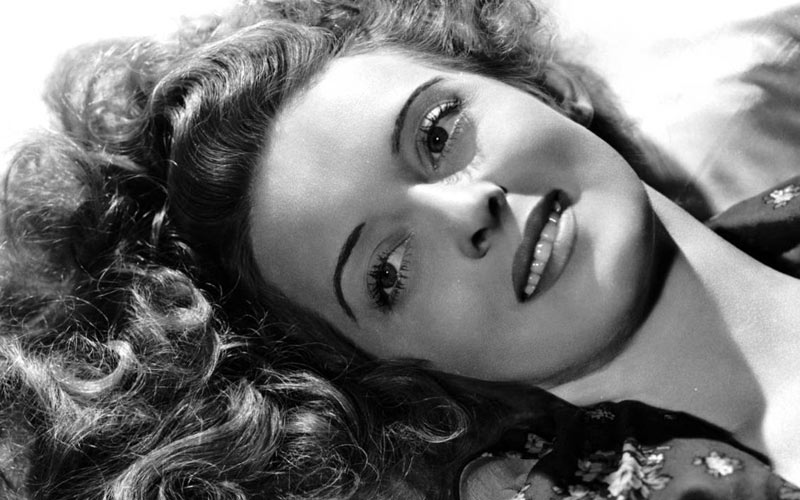 Ruth Elizabeth “Bette” Davis is one of the world’s most iconic actresses of all time. Known as much for the larger-than-life characters she portrayed on screen as she was for her own fiery, over-the-top personality, Bette Davis did things her way and never apologized for it. As she famously said, “If everyone likes you, you’re doing your job wrong.”

Born on April 5, 1908 in Lowell, Massachusetts, the self-proclaimed Yankee went on to become the first female president of the Academy of Motion Picture Arts and Sciences as well as the first person to be nominated ten times for an Academy Award (she won for 1935’s “Dangerous” and 1938’s “Jezebel“). Davis died at the age of 81 on October 6, 1989 in Neuilly-sur-Seine, France, but she continues to fascinate and inspire future generations around the world.

Bette Davis was not only a one-of-a-kind talent (with those famous Bette Davis eyes), but she was also a fierce woman who fought the old boy’s club of the Hollywood studio system and wasn’t afraid to use her razor-sharp tongue both on and off screen. Read on to retrace the steps of this iconic actress in Los Angeles where she lived, loved, lost, and left a legacy that continues to this day. 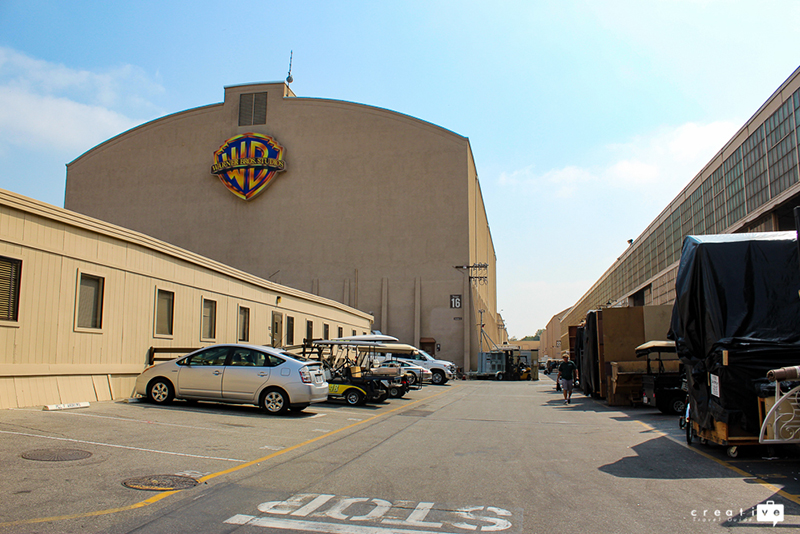 In 1932, Bette Davis landed a contract at Warner Bros where she stayed through 52 films (including career-changing performances in “Of Human Bondage,” “Jezebel,” “Dark Victory,” “Now, Voyager,” and “Whatever Happened to Baby Jane?”), two Academy Awards, many suspensions, countless tantrums and one bitter lawsuit. She famously sued the studio in the 1930s over her contract and helped to precipitate the end of the old studio system whereby actors were exclusively contracted to one studio.

The Los Altos Apartments is a Mission Revival style apartment building listed on the National Register of Historic Places. Located on a busy stretch of the nearly 16-mile long Wilshire Boulevard, the building is at the intersection of Wilshire and Crenshaw in the Hancock Park area of Los Angeles. Bette Davis lived in unit 107. The building is also said to be haunted by the ghosts of William Randolph Hearst and his mistress, actress Marion Davies. It was also the filming site of many TV shows including Angel and Buffy the Vampire Slayer, among others. 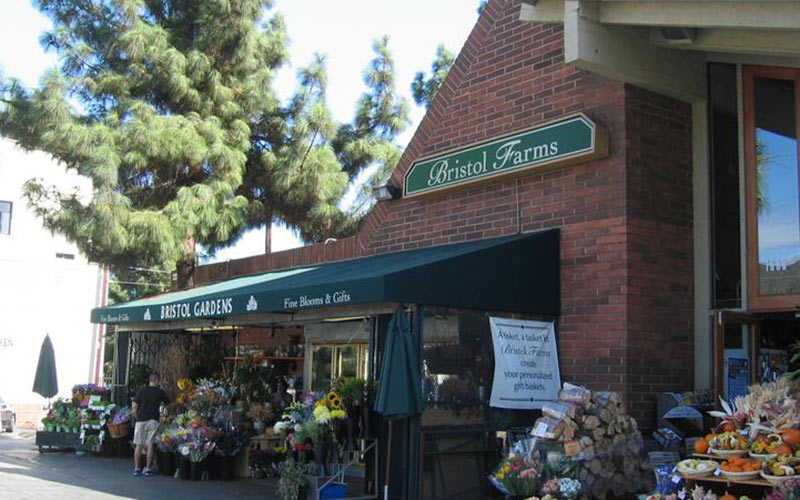 Chalet Gourmet was a landmark market in Hollywood and one of Bette’s favorite stores. It’s mentioned as the star’s go-to place to get meat for Thanksgiving in “Miss D and Me: Life with the Invincible Bette Davis.” The 2017 autobiography was written by Kathryn Sermak, Davis’s personal assistant and confidant for the last 10 years of the star’s life. 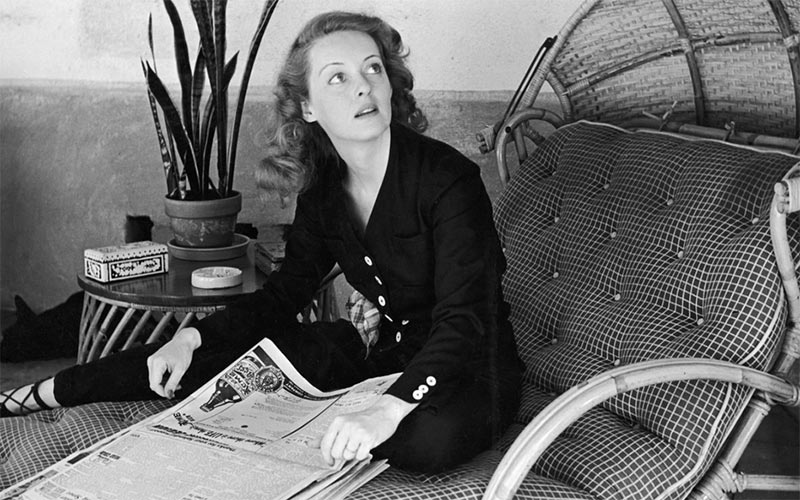 In 1939, the then 30-year-old actress was married to her first husband Harmon “Ham” Nelson. They couple lived in a hacienda-style house sitting on an acre of land replete with a red-tile roof, swimming pool and tennis court. Davis spent most of her time outdoors—evidently she would indulge in a daily sunbath in her own private enclosure—surrounded by gorgeous landscaping and a sprawling outdoor patio with Mexican decor. 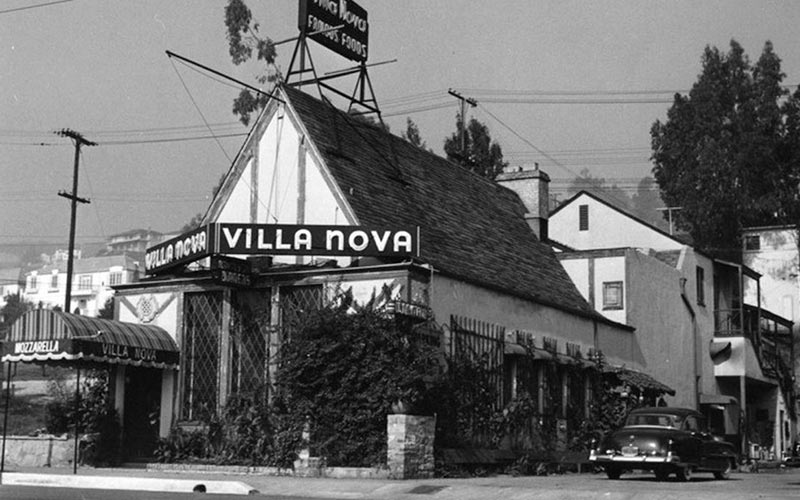 This historic spot on the Sunset Strip might be known as a drinking haunt for rock stars (and their groupies), but back in the 40s and 50s before Led Zeppelin, KISS, Motley Crue and Guns N’ Roses took hold, it was a respectable Italian restaurant for Hollywood’s A-list. Bette Davis, Charlie Chaplin, Bing Crosby, Elvis Presley, Marilyn Monroe and Judy Garland all spent time here.
According to Alison Martino, founder of the popular blog Vintage Los Angeles, if you look up at the entrance of the Rainbow Bar & Grill today, there’s a skylight that still says Villa Nova on it. 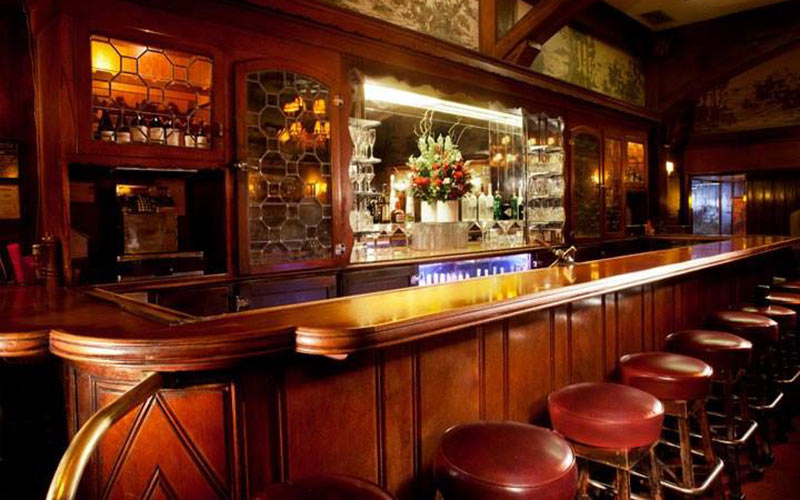 This Hollywood Boulevard mainstay is like a literal step back in time. It’s been around since 1919 and was recently revived to return to its former glory. Bette Davis, Orson Welles, Charlie Chaplin, and Charles Bukowski were all regulars. You can still have a martini on one of the leather banquets or bar stools and reminisce about the old days with some of the red-jacket-and-black-bow-tie wearing staff who have been at Musso & Frank for decades. 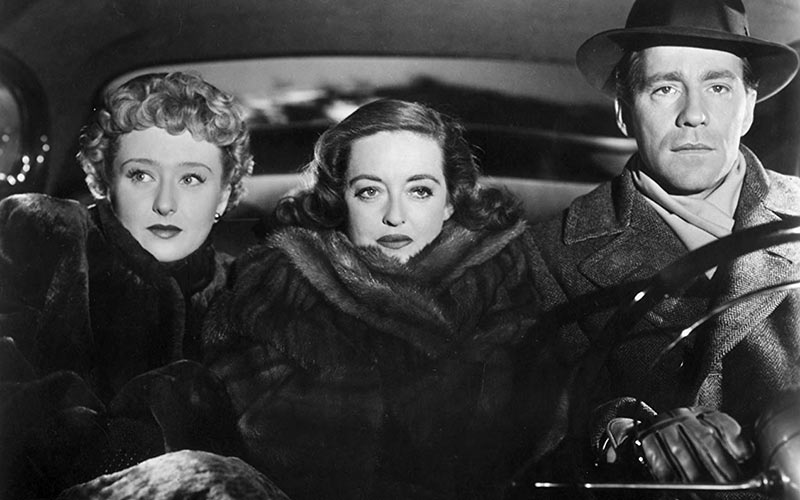 In LA, traffic is a way of life. Finding less-congested side streets is a miracle that Angelenos seek on a daily basis. One of these so-called miracles is Fountain Avenue, a more residential street that runs between and parallel to Sunset Boulevard and Santa Monica Boulevard. When Johnny Carson asked Bette Davis for her advice on “the best way an aspiring starlet could get into Hollywood,” Davis cleverly proclaimed, “Take Fountain!” 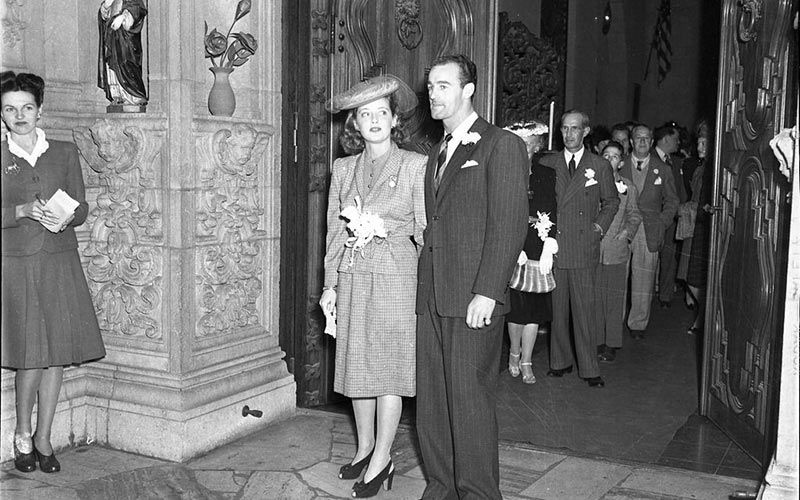 On November 30, 1945, Bette Davis married her third husband (she had four in total), an artist named William Grant Sherry. They celebrated at the historic Mission Inn in Riverside, California, an area in the Inland Empire located about 55 miles east of Downtown LA. It’s rumored that Davis was drawn to Sherry because he had no idea who she was and she liked the idea that he would be neither intimidated nor in awe of her.

On November 6, 1950, soon after the premiere of “All About Eve,” (a movie which won numerous awards including the “Best Picture” and “Best Director” Oscars in 1951 and to this day has a 100% rating on Rotten Tomatoes), Davis literally cemented her legacy outside Grauman’s Chinese Theatre with two Marine escorts to help her. You can visit this Hollywood Boulevard landmark today and place your hands in her palms. 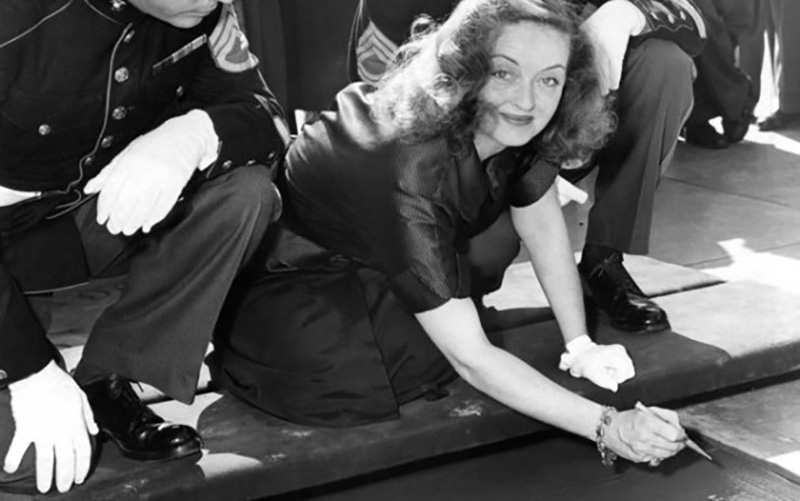 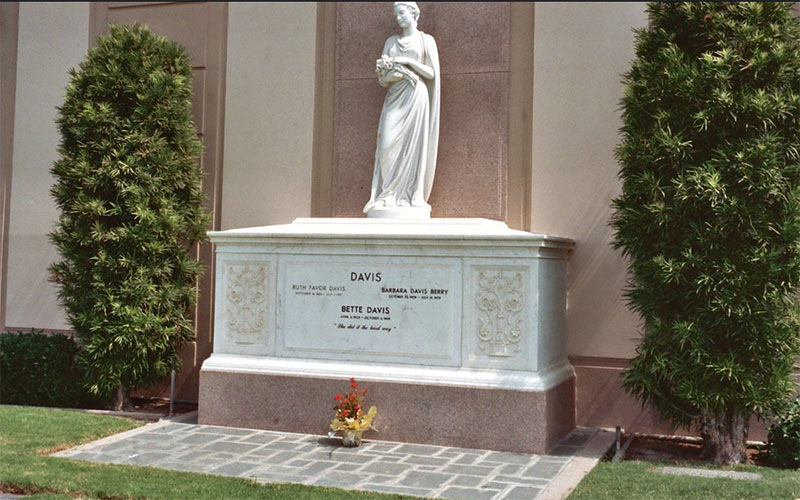 Buried next to her mother and sister, Davis was quite proud of her tomb and would often show it to friends and family. Her epitaph says “She did it the hard way.”

To learn more about the incredible life of Bette Davis, there’s plenty to read. Her autobiography “The Lonely Life” is a great place to start. The biographies “The Girl Who Walked Alone” and “Dark Victory: The Life of Bette Davis” are also excellent, intimate portraits of the actress.

Vegan Yellowstone: How to Eat Plant-Based in This National Park →
← What You Need to Know Before Staying at Yosemite Half Dome Village
Search Marpop
Recent Posts