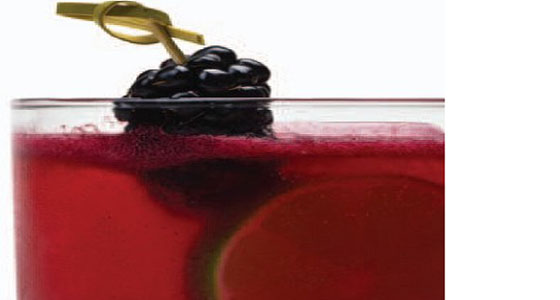 Salud! It’s not just something you say while clink-clinking your way to buzzdom anymore. Now you really can drink to your health thanks to the growing trend of healthy cocktails that contain everything from immune-boosting herbs to liver-cleansing veggies. Ironic? Lest we forget, alcohol itself was originally a form of medicine. So go ahead and raise a glass… or two. Just don’t tell your doctor I told you so.

Don’t let the name fool you. This “dangerous” sake concoction at Scratch Bar is pretty damn good for you thanks to the turmeric, a superspice loaded with healing properties, and cayenne, which, despite its spicy heat, actually reduces pain and is known for its cardiovascular benefits and ability to help prevent ulcers.

Bloody Mary = Breakfast of Champions? Pretty much. Tomatoes are rich in vitamins and minerals while garlic is well-known for its antibacterial, antiviral, antifungal and antioxidant properties. But the not-so secret ingredient of this version is tiato, a strong immune-boosting herb considered to be the most flavorful of the mint family. It’s also the name of the restaurant, so it must be pretty frickin’ special, right?

No need to feel guilty at this newcomer in Culver City with the Lorne vodka cocktail loaded with good-for-you ingredients including pomegranate, grapefruit, ginger, rosewater (a natural anti-inflammatory) and bitters made from cardamom, a detoxifying agent that helps with everything from digestion to oral health.

Less is more. At least when it comes to this drink. With just two ingredients, the Rum & Coconut Water at Cana Rum Bar does the trick with dark rum and coconut water that will (supposedly) stave off tomorrow morning’s hangover thanks to its hydrating, electrolyte-charged, potassium-packed properties.

This Vietnamese take on the Cuban mojito features kinh gioi leaves, which are known to cleanse the digestive tract and helps make your mind sharper, eliminate toxins from the body, cleanse the blood and even whiten teeth (as long as the leaves don’t stuck in between them).

Focusing on seasonal plant-based cuisine, it makes sense that M.A.K.E. restaurant has crafted a menu of wine-based cocktails. Try the delicious Heartbeat made with blood orange, which contains high levels of anti-cancer flavonoids, beets (a great liver tonic) and stress-reducing basil.

Marcos Tello’s Ward Eight cocktail is the most popular drink at the health-obsessed FEED on Abbot Kinney and it’s no wonder why. It’s made with 100% organic ingredients including rye whiskey, pomegranate, lemon juice and orange juice. In fact, all of the spirits at this bar are organic without any refined sugar — the only bar program of its kind in the US.

Downtown LA’s home to the largest selection of tequila and mezcal is where you can indulge in the Poblano Escobar, a smoky-sweet mix of muddled poblano chili (a mild bell pepper-ish chili loaded with vitamin C), cumin (an antioxidant and anti-osteoporotic), and vitamin-rich pineapple, agave and lime.

Drink your red medicine with the #79. Along with the smoky mezcal, you’ll get a healthy dose of vitamins thanks to the fresh carrot, ginger and beets (juiced in-house daily), honey and lemon.

Along with farm to table, Willie Jane brings garden to glass with cocktails like the Floral, which contains rosemary and thyme (two powerful detoxifying agents), Coal Miner’s Daughter that mixes thyme and macerated ginger (an anti-inflammatory) and the Bramble featuring hand-picked lemon verbena, an herb known to strengthen the nervous system.

This modern-Mex spot is where you can get a number of “healthy” margaritas. If you want a little kick, try the Beetarita made with fresh red beets and ginger puree. If you really need to relax, do the Cucumber Lavender version made with housemade lavender syrup and fresh lavender garnish. Because if the tequila doesn’t calm you down, then the lavender’s natural soothing powers certainly will.

Want some sage advice? Drink the Mr. JC at this Santa Monica mainstay. It’s loaded with raspberries and blueberries (we all know the health benefits of these), plus sage, which is not only an anti-inflammatory, but it’s also an outstanding memory enhancer.

Pears are great sources for nutrients like vitamin E and omega-3 fatty acid. Turn to the pear-fecto for a quick dose of antioxidants made from just three simple ingredients: Fresh pear nectar, pear vodka and ice.

During the month of September, try SOL Cocina’s antioxidant-rich Raspberry Acai Margarita made with acai liqueur and fresh raspberries from the Newport Beach’s Farmers Market.

Blueberries and blackberries aren’t only great antioxidants, but they contain loads of vitamin C and potassium, which is great for the heart.

This cocktail with Fresno chili and fresh ginger is a perfect after-dinner drink to promote healthy digestion.

Full of fresh blackberries (top 10 foods containing antioxidants and known for fighting cancer, heart disease and hypertension), a Diablo Smash a day will keep the doctor away.