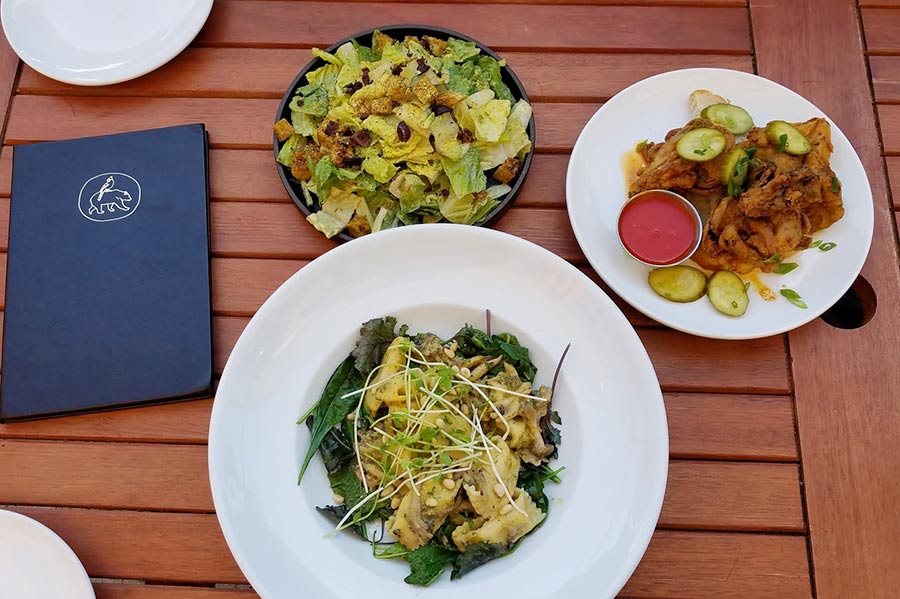 When you’re looking for a comforting homemade meal that you don’t have to cook yourself, Donna Jean is just the place to go. After doing a little online research for vegan options in the San Diego area, I soon realized that Donna Jean was going to be a must-try spot for my husband and me while in town. What’s more, after talking with our server, we found out that Donna Jean will be heading to LA—Studio City, to be exact—sometime in late 2019.

Along with the great-looking menu options and excellent customer reviews, I had also discovered that the restaurant was named after chef-owner Roy Elam’s mom who unfortunately passed away from breast cancer. Toward the end of her life, doctors told her to adopt a plant-based lifestyle and thus was the birth of Donna Jean restaurant, which opened in 2017.

Prices are reasonable, especially for the quality of the food. Service is friendly and the staff is very knowledgeable and helpful. We usually order up a storm, but since we were staying at a nearby hotel, we didn’t want to order too much and haul back leftovers that wouldn’t fit in our room’s mini fridge. As such, we didn’t try the famed Cast-Iron Mac & Trees (smoked cheddar with broccoli) or any of the entrees. But what we did order was enough to make us want to go back.

Here’s what to expect at Donna Jean, coming soon to Studio City! 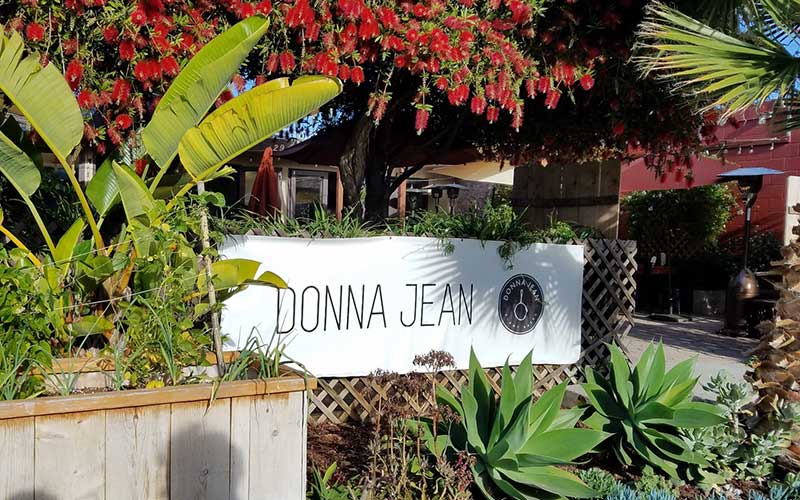 The entrance to the restaurant is lush and welcoming. Located along Fifth Street in downtown San Diego, Donna Jean has a spacious outdoor patio with heat lamps as well as indoor seating. 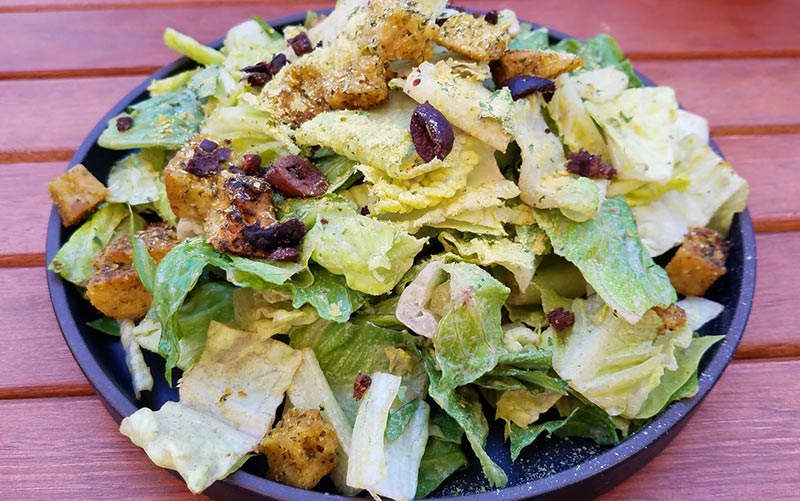 To start, we ordered the Caesar salad made with romaine, dried olives, nori (to give it that oceanic, anchovy-like flavor) and garlic Parmesan croutons. It was a good salad, although I must admit the hands-down absolute best vegan Caesar salad you’ll ever have is at Crossroads Kitchen in West Hollywood. 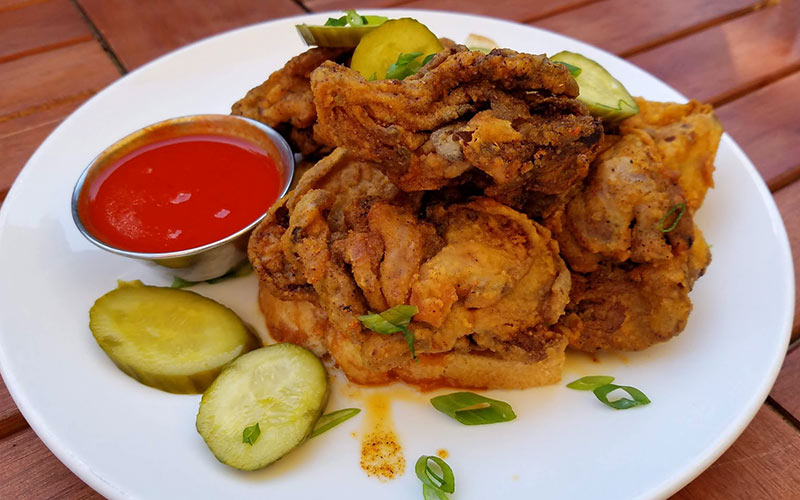 OMG. This insanely delicious creation is called Hot Shrooms on the menu, but it’s best described as Fried Chicken Mushrooms! These Nashville-style breaded oyster mushrooms have the texture, taste and finger-licking addictiveness of fried chicken…without all the bird parts. This mushroom appetizer typically comes with a housemade hot sauce drizzled on the ‘shrooms, but I asked for it on the side since the batter is already spiced.  The pickles were a great touch too. It’s served on white bread but we didn’t bother eating that. These oyster mushrooms are so good on their own you don’t need anything else. 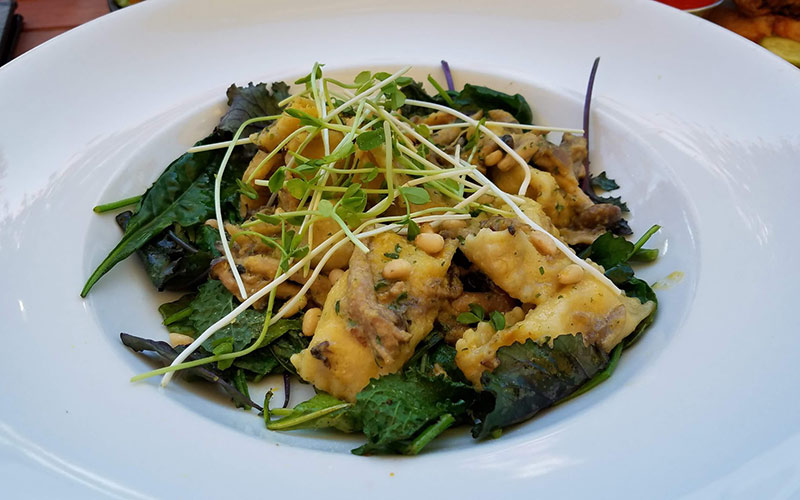 The menu has a seasonal selection of handmade pastas, all of which sound amaze. We ended up choosing the agnolotti stuffed with truffle dill ricotta and sauteed in brown butter with mushrooms and pine nuts. Served atop a bed of wilted greens this dish was a standout by any foodie’s standards. 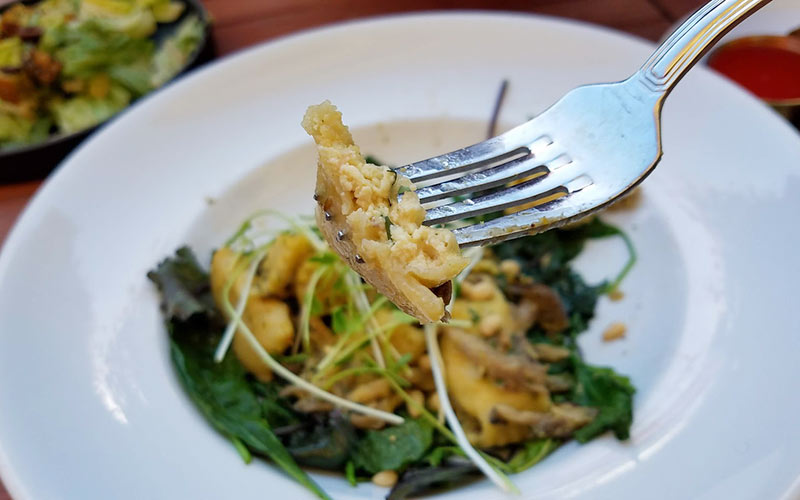 As I said, this stuff is so dang good. Pillows of handmade pasta delicately stuffed with plant-based ricotta. Every forkful was better than the next. 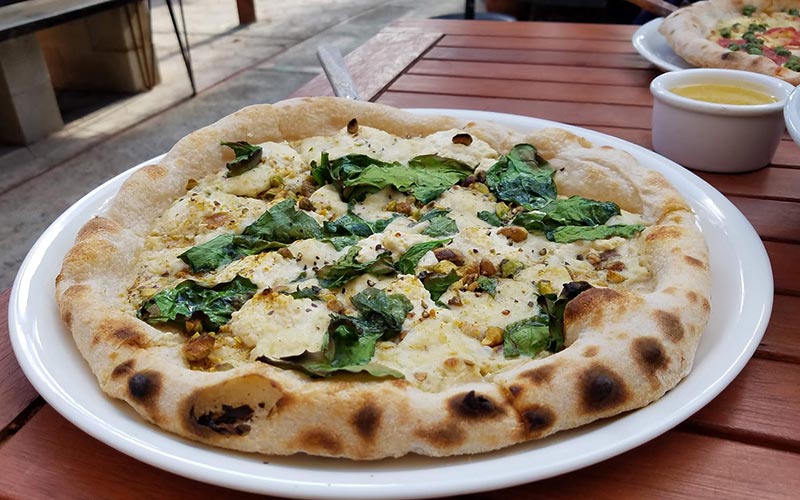 Ever since our rather disappointing experience with red pizza at Double Zero in Venice, my husband and I have been a little weary of pies with red sauce. We chose this white pizza with white wine garlic cream, mozzarella, ricotta, spinach, pistachios and preserved lemon vinegar. It was the right thing to do. The crust is airy and didn’t get soggy in the center. The hint of lemon was perfect and the cheese and pistachios offered great textural contrast. By the way, see that little container of yellow sauce on the upper right corner of the photo? That’s garlic butter, which is under the “Crust Dunx” section of the menu. It’s so garlicky and really takes the pizza over the top. 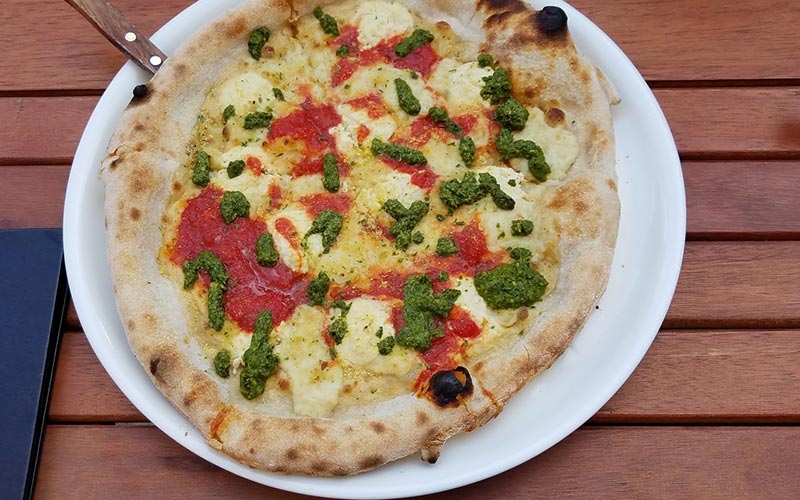 As mentioned, I’m a little more suspicious when ordering red pizzas (at least for now), but the Four Horsemen was the perfect compromise with just a touch of marinara. Add to that the smoked cheddar mornay, mozzarella, ricotta, Bianco Dinapoli tomatoes and pesto and you have one incredibly delicious pizza that has the right combination of cheesy flavor and crispy crust.

How About a Slice? 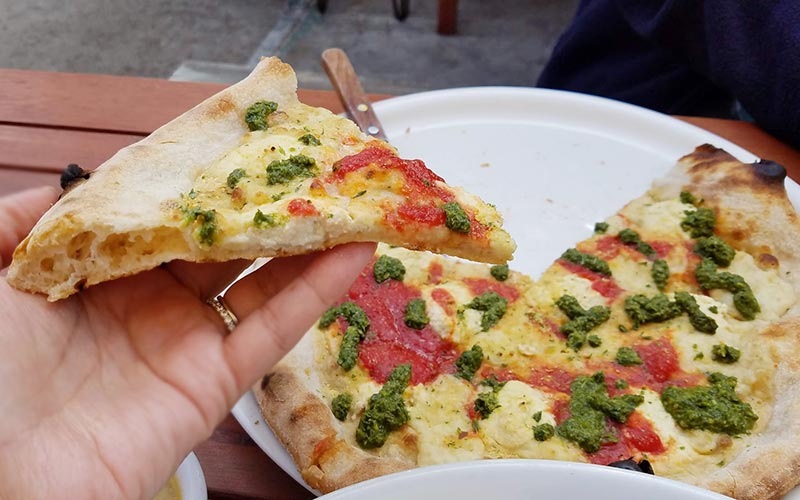 A gratuitous close-up shot of the Four Horsemen pizza. I really enjoyed the mix of pesto and marinara. It’s usually one or the other, so I appreciated the combo. FYI, pizzas can be ordered gluten-free with a socca crust instead of whole wheat. 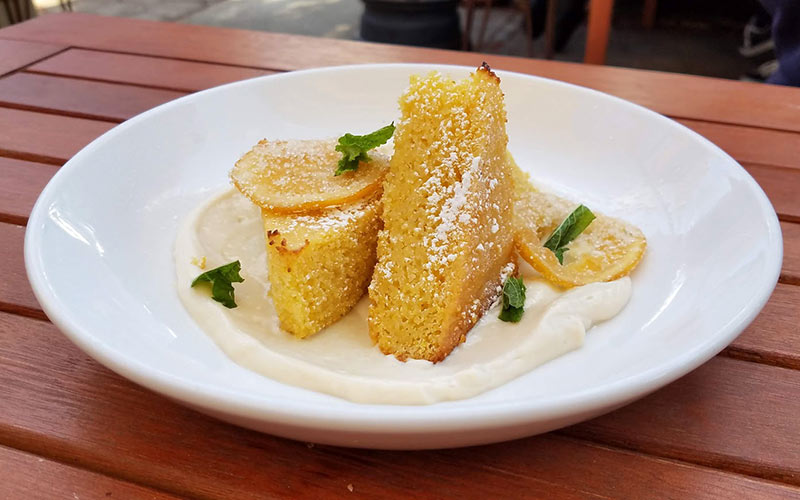 What a way to finish! This subtly sweet treat had a wonderfully light lemon flavor permeating the airy cornbread while the sugared lemon slices added a nice exclamation point to the whole experience. It also had some of the creamiest, tastiest housemade whipped cream ever. Kudos to the pastry chef! Hopefully they use that whipped cream in other desserts throughout the year.

Until We Meet Again 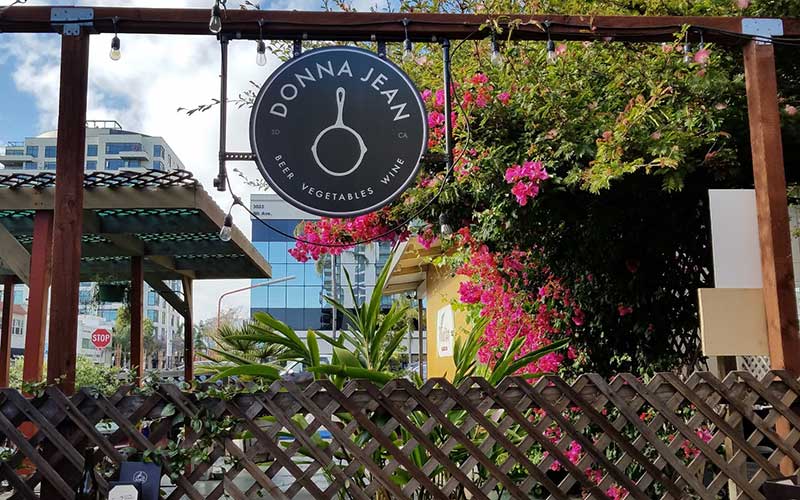 All in all, we will definitely return to Donna Jean next time we’re in San Diego. Even better, we’ll head over to the new Donna Jean in Studio City as soon as it opens.

For more information and updates, check out Donna Jean online. What are some of  YOUR favorite vegan spots? Let me know in the comments!