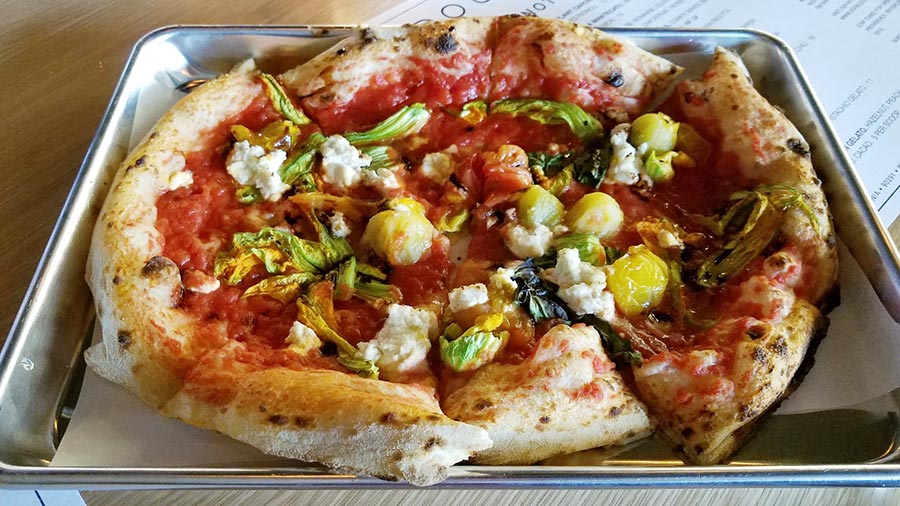 If the thought of artisanal-style, plant-based, wood-fired pizza makes you giddy with glee, then you’ll understand the excitement my husband and I felt when we headed over to Double Zero in Venice on opening night. Admittedly, our expectations were fairly high since this place is part of restaurateur Matthew Kenney’s growing food empire. I’m already a fan of Plant Food + Wine on Abbot Kinney in Venice (the food is so pretty and tasty too!) so I figured if he does veggies so well there, surely he’d be elevating pizza to another level.

Well … let’s just say things didn’t pan out exactly as we had hoped. There are some definite scores for Double Zero, which you’ll see below, but there is also serious need for improvement. I don’t want to be too harsh considering we were there on opening night, but if you’re a place that’s ALL about pizza, then you better do it right!

I do appreciate that all the pizzas can be made gluten-free and nut-free for anyone with food allergies or sensitivities. What else did I like? Read on for my take on Double Zero and then decide for yourself! 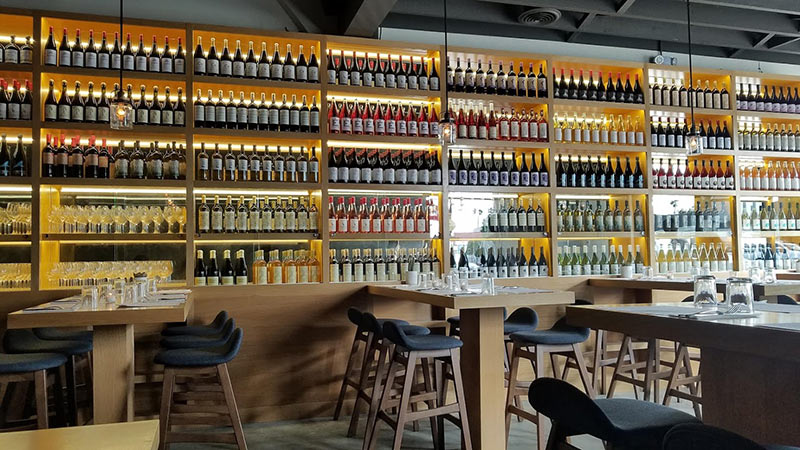 The space is a modestly sized box with a cool-looking wine wall. A lot of the wines are biodynamic and organic, but we’re not really drinkers so we simply admired from afar. 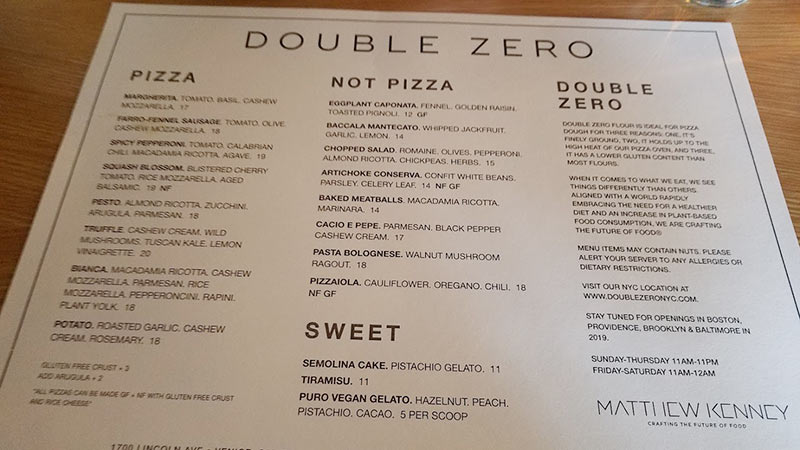 As you can see, the menu is straightforward with pizzas priced in the $17 to $20 range. The manager Michael could not have been any nicer and right away he recommended a few things, all of which we ordered. 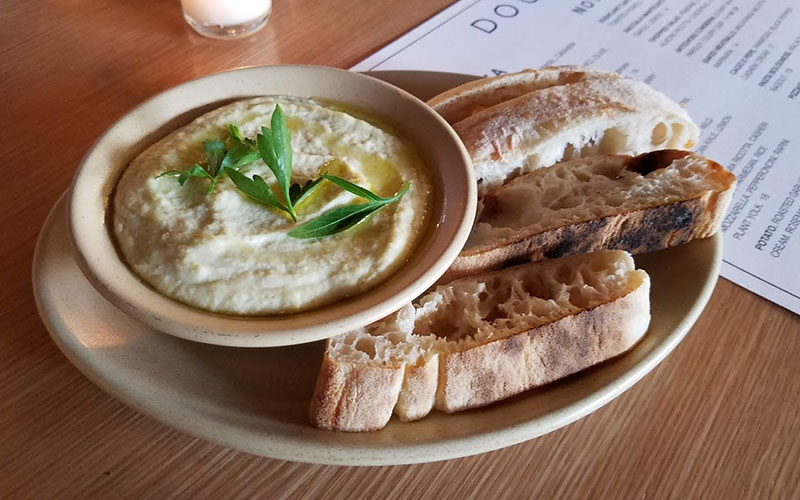 We were told the baccala mantecato was a must-have vegan rendition of the classic Venetian dish. While this savory spread is usually made with whipped salt cod, Double Zero does it with whipped jackfruit. For some reason, I was expecting it to be a little smoky in flavor, but it was not. It tasted exactly like creamy white bean hummus. Which isn’t a bad thing, but had I known, we probably wouldn’t have paid $14 for a small bowl of hummus. 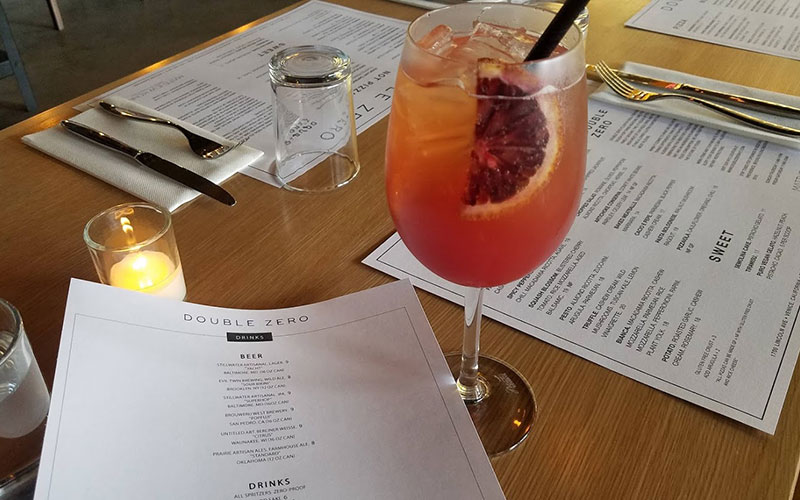 This spritzer is made with blood orange, cream soda, orange blossom essence, simple syrup and sparkling water. I thought it was too sweet but my husband thought it was just right. If you’re in the mood for a liquid orange creamsicle, this drink is for you. 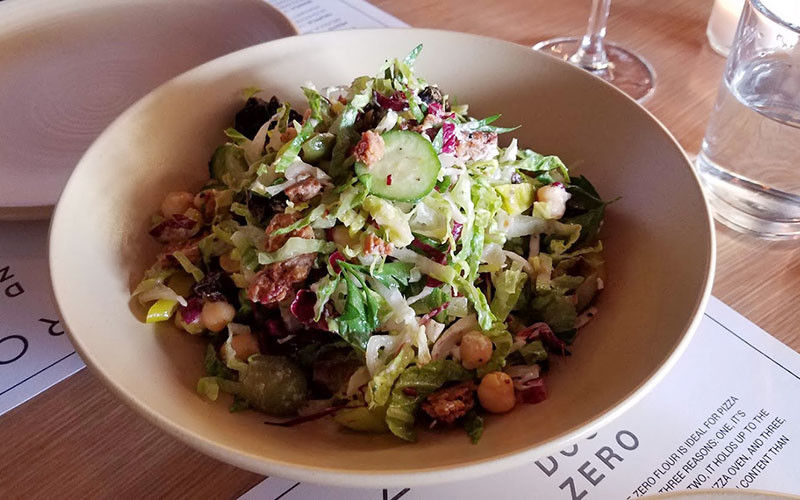 A real winner, this chopped salad hit all the right marks. A classic zesty antipasto salad, this delicious starter is made with romaine, olives, pepperoni (which is more like chunks of tempeh), chickpeas, herbs, a hint of almond ricotta and pepperoncini. Would definitely get this again. 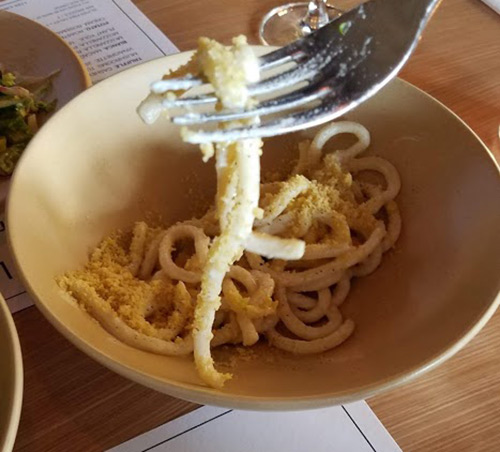 Housemade pasta that’s perfectly al dente? Yes, please! Along with the antipasto salad, the cacio e pepe was a true highlight of the meal. Thick handmade noodles dressed in a creamy cashew sauce, vegan Parmesan and just a sprinkle of black pepper come together to prove that less is more. Speaking of more, we considered getting a second serving but at $17 for just a few bites, we passed. In retrospect, we should have gotten another order of the pasta instead of another pizza. 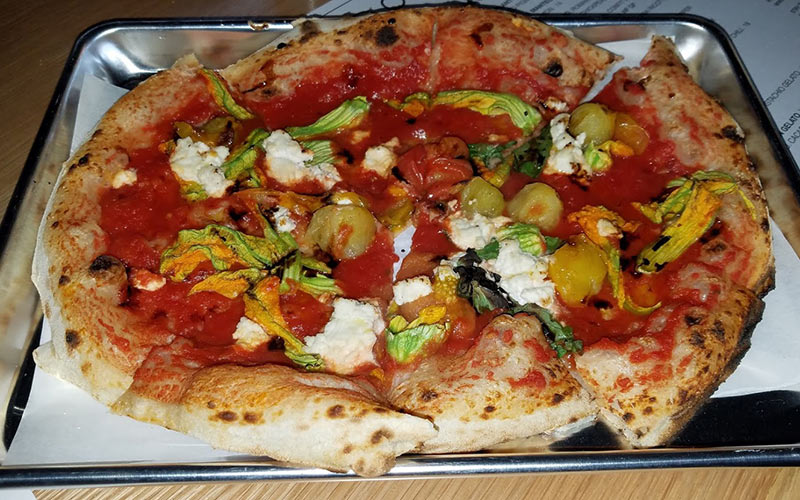 OK, so now we get to the pizza … let’s start with the squash blossom. I was so looking forward to this because 1) I’m a sucker for squash blossom and 2) I figured how can you go wrong with squash blossom? Unfortunately, Double Zero managed to get it wrong. The center of the pizza — and every other pizza we ordered — quickly got soggy and wilted. I think the marinara sauce is simply too heavy for the thin crust. Also, the flavor of the whole pie simply tasted like dough with bright marinara sauce. There was no complexity or crave-worthy elements. FYI, we also tried the truffle pizza (no photo, unfortch) and THAT was the best pizza of the bunch … probably because it didn’t have any red sauce. Lesson: If we end up back here, we’re only ordering white pies! 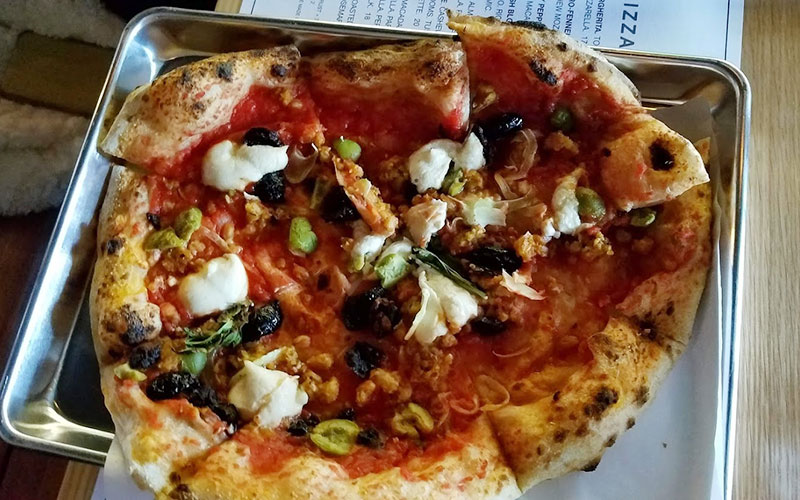 If you want that classic sausage flavor, then the farro-fennel sausage pizza will deliver. It also has green and Kalamata olives, which give it a salty kick and the cashew mozzarella isn’t bad. Again, the major downside is that five or ten minutes into the pizza, the center gets quite flaccid. ¯\_(ツ)_/¯ 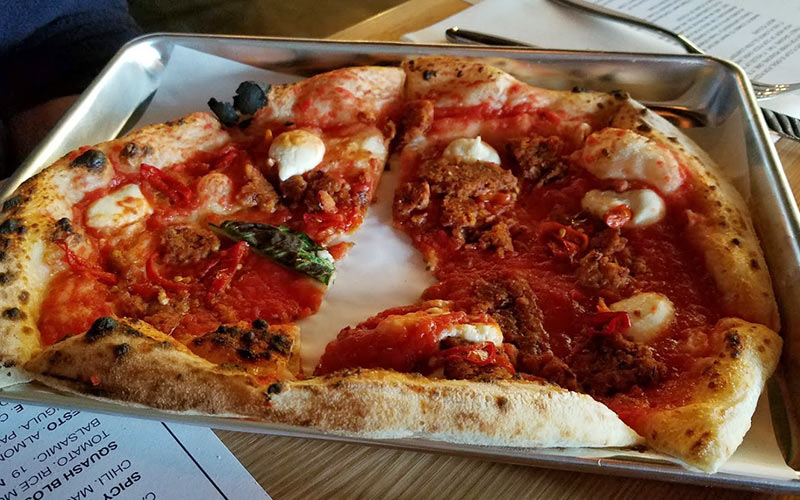 Red alert! This pizza is described as spicy and it’s no lie. My mouth was a little on fire, but that’s not why I didn’t love this pizza. I was really excited about having a vegan pepperoni moment since it’s downright impossible to find a good plant-based pepperoni. Sadly, this isn’t it. The pie was topped with housemade pepperoni (I didn’t ask what it actually was, but it had the texture of tempeh or something walnut-ish), Calabrian chili and macadamia ricotta. I really wanted to love it, but it just didn’t make any impression other than that it was spicy and soggy. They do add a drizzle of agave on the pizza, which is a sweet contrast to the spiciness, but it wasn’t enough to make me want to order it again. 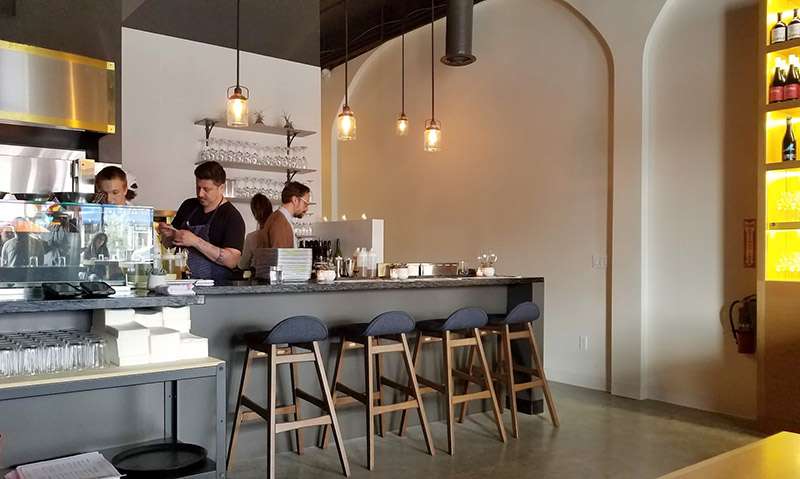 The bar area is fairly basic with four high counter stools. The wood-fired pizza oven is off to the left. 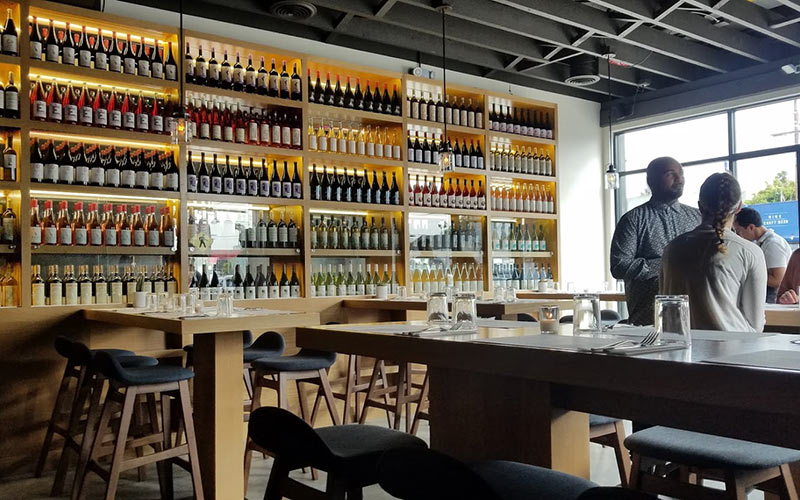 Here’s another angle of the space. By request, we sat at the only low communal table in the restaurant, which is located at the back of the small room. All the other seats in the restaurant are high stools. 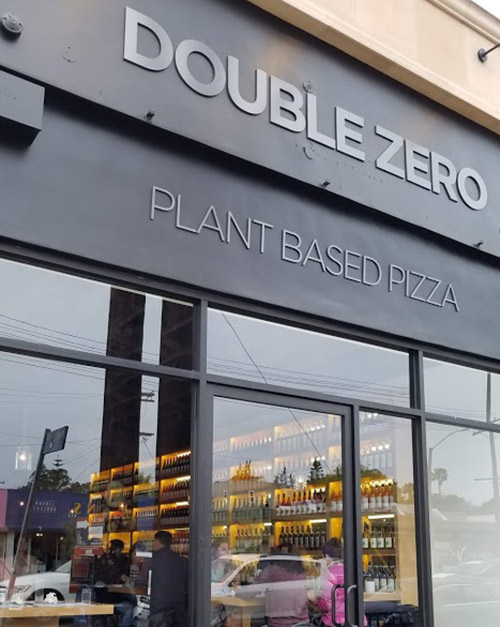 Well, there you have it. My honest review of Double Zero in Venice. I love the idea of a plant-based pizzeria and fully support any restaurant that uses natural and sustainable ingredients. However, we’ll have to continue our quest for a go-to pizza place.

Funnily enough, our fave spot for vegan pizza is not a pizza place at all — it’s  Crossroads Kitchen on Melrose in West Hollywood. Not only is this my favorite restaurant in LA, but it’s where to find the BEST pizza around! Its only available on the dinner menu, so you’ll have to stop by after 5pm. Airy, light, thin crust that magically never gets soggy is topped with pepperoni, sausage or whatever veggies are in season.

What’s YOUR favorite place for plant-based pizza? I’m always looking for good food finds, so leave a comment below!

For more info, check out the Double Zero website.