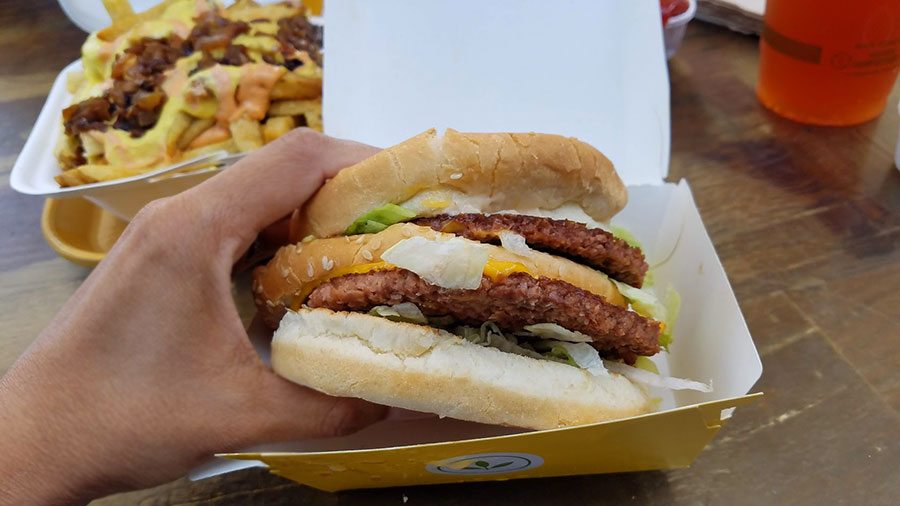 Whether you’re a full-time vegan or just trying to wean yourself off eating so much meat, there’s a fast-food option you’re gonna love. It’s called Plant Power Fast Food.

After checking out their menu online and seeing that they had vegan versions of the Big Mac and plenty of other fast-food eats, I was sold. I don’t eat vegan junk food often, but it’s great having the option. For the past few years, my go-to vegan “Big Mac” has been the Big Wac at the Green New American Vegetarian Restaurant in Phoenix, Arizona. But I only get that a couple times a year when I visit AZ.

Anyhow, here’s a review of Plant Power Fast Food in San Diego, which has the same menu in Long Beach. 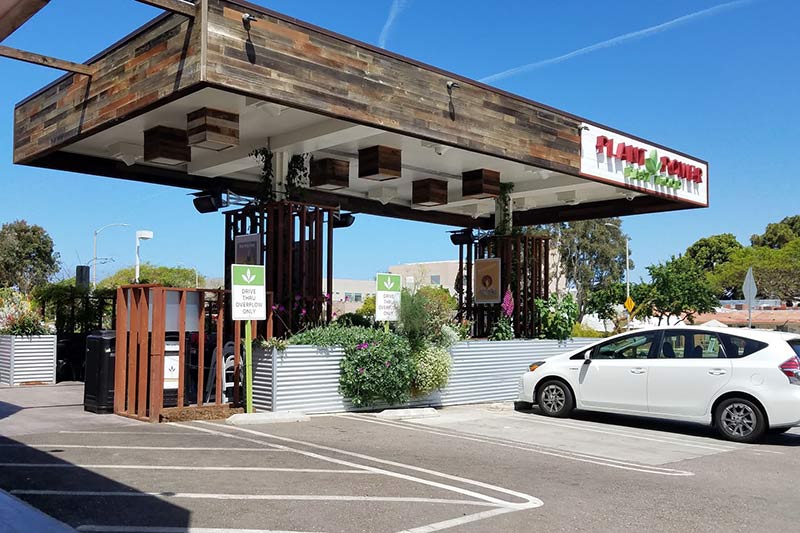 As you can tell from the architecture, the Encinitas location of Plant Power Fast Food is at the site of a former gas station. Except instead of filling up your car on gas, you can load up on some gas-inducing fast food. (I kid, I kid. Kinda.) The plants and flowers made for a nice little outdoor setting.

Yes, There’s a Drive Thru 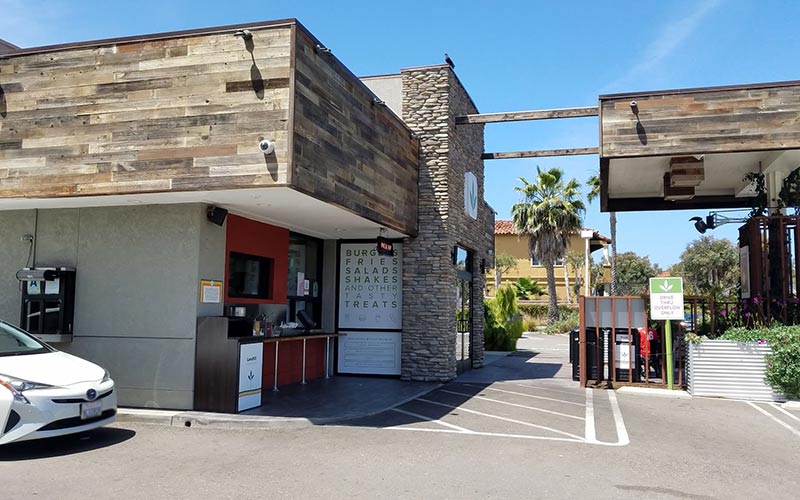 A vegan burger joint with a drive-thru?! This is a game-changer. Most vegan fast-food spots I’ve visited require standing in line but Plant Power Fast Food got it right. Hopefully the Long Beach location will have this option for people who need to eat and run. (Or drive.)

Having a Big Zac Attack 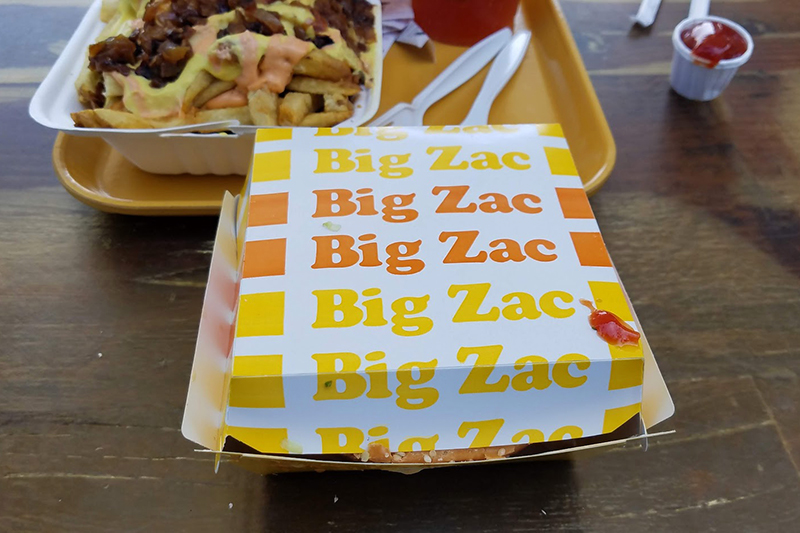 From the Big Zac burger packaging to the framed posters hanging on the outdoor posts (forgot to take pix), Plant Power Fast Food is all about that early 80s design aesthetic. 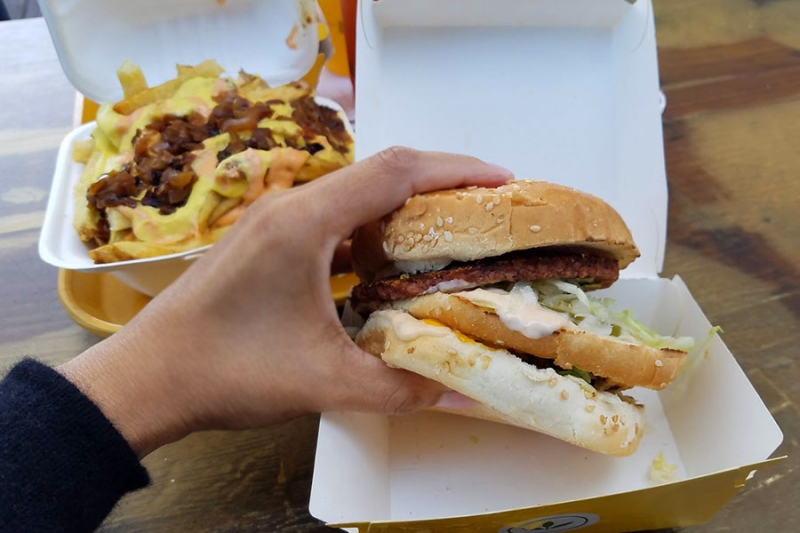 Let’s get one thing clear: The Big Zac isn’t going to be a tidy situation. Trying to hold it together with one hand while snapping a photo with the other was the first sign that this burger wasn’t going to be a mess-free meal. But so what? With its two beefy patties, special sauce, American “cheese,” lettuce, onions and pickles it totally satisfies any fast-food craving. 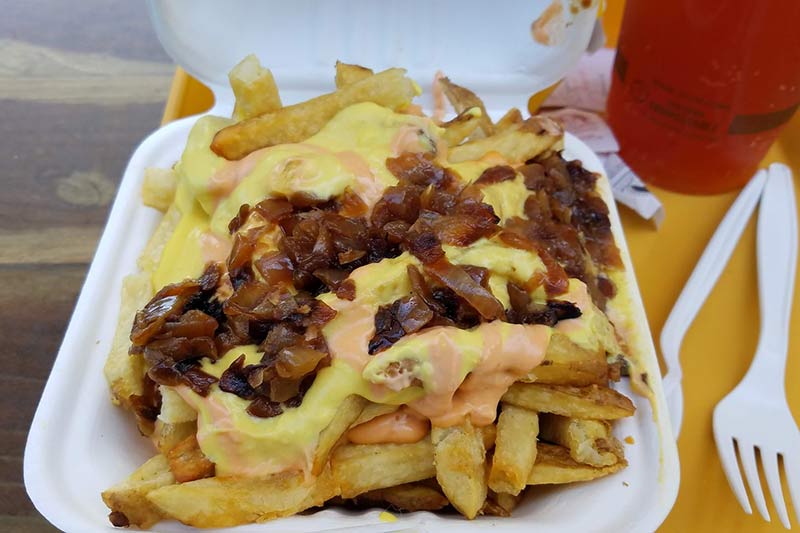 The Big Zac was quite tasty, but I liked the Voodoo Fries best. Loaded with secret sauce, Plant Power’s signature cheesy sauce and grilled onions, I almost wanted a second serving. The fries are crispy and slightly reminiscent of the animal-style fries at In-N-Out. 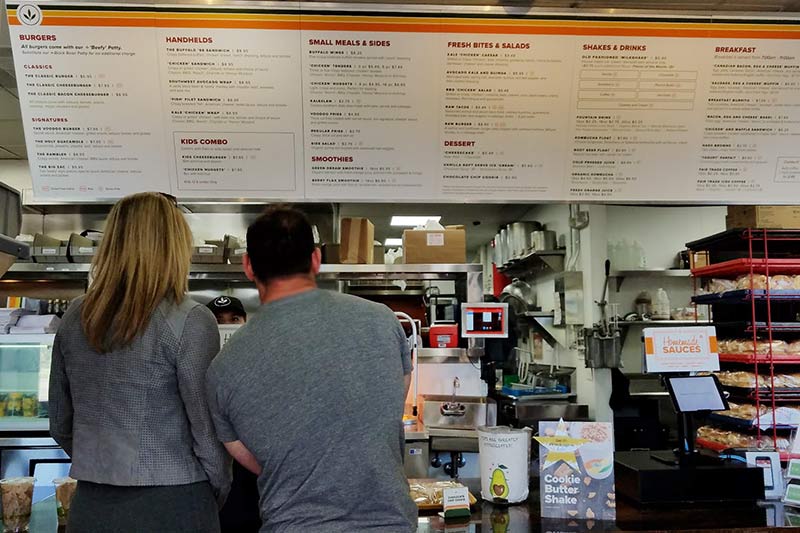 Inside the tiny space (there are only seats outside at the Encinitas location, not sure what the other locations are like) is where you can order anything from burgers and chicken sandwiches to fries, milk shakes, GTS komucha on tap (as well as kombucha floats) and breakfast up until 11am. We arrived five minutes after 11am and were told we were too late for breakfast, so I can’t tell you what their take on Egg McMuffins are like. ¯\_(ツ)_/¯

You Can Take it With You 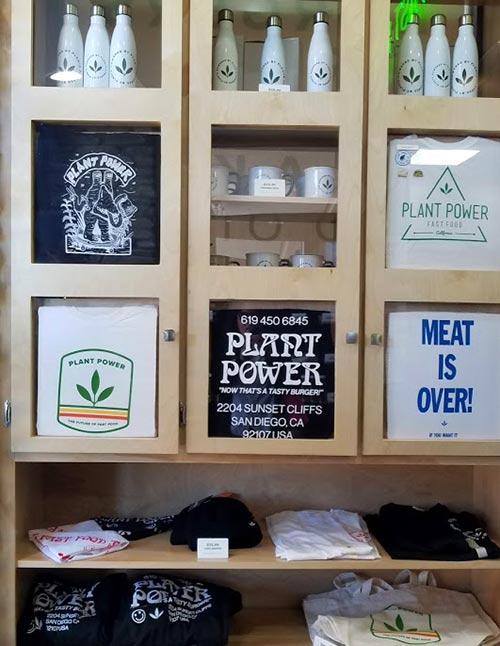 In addition to all the vegan hamburgers and vittles, Plant Power Fast Food offers plant-based proselytizing merch if that’s your thing.

What are YOUR favorite spots for vegan burgers? Let me know in the comments!