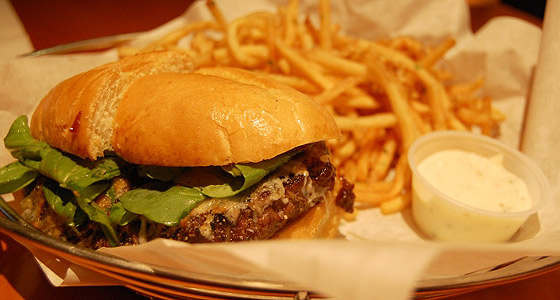 Where’s the beef? In case you missed the arbitrary-holiday-of-the-month memo, May was National Burger Month. But there’s no reason you can’t keep celebrating all year long. There are a million “Best Burger” lists out there, and since it’s all just a matter of taste anyway, here’s my own hit list of where to find a great burger around Los Angeles from tasty gourmet beef-less versions to a super-duper juicy mess.

Go Burger – Hollywood
The godfather of all godfathers. What more can I say? This newish place just a block away from the Arclight on Sunset and Vine serves up burgers that are seriously out of control. (Not surprising that this place knows meat–it’s part of the BLT Restaurant Group.)  If you’re ready to clog your arteries and balloon to the size of Marlon Brando (I knew that Godfather reference would make sense at some point), then be sure to ask for the Lambeau Leap, a seven-ounce patty topped with a ridiculously decadent baked mac & cheese crisp that’s gooey yet completely contained within the fried crisp shell, caramelized onions and bacon. Eat that and die happy. But I recommend you keep living long enough to finish it off with the Twinkie Boy, an over-the-top milkshake of pulverized Twinkie pieces swirled among vanilla ice cream. Dying!

Fraiche – Santa Monica
Who knew such an incredible burger could be had during happy hour … for six bucks?!?! Probably the best turkey burger (and happy hour) on the Westside, and certainly the best deal if we’re talking gourmet burgers, Fraiche’s turkey burger is a perfectly-cooked, subtly spiced patty topped with Gruyere (try it without; really doesn’t need it) and arugula sandwiched between two soft brioche buns slathered in devilishly good spicy aioli. There’s also a truffle burger and short rib burger that’ll rock your world. FYI–these burgers are only available at the Santa Monica location, not Culver City. Happy hour happens Sunday-Thursday 5pm-close and Friday-Saturday 5pm-7pm.

Royal T – Culver City
This is a real surprise. For a place better known for its outrageous parties, eye-popping artwork, and waitstaff dressed in French maid outfits, Royal T sure knows how to make a near-perfect burger. The Kobe Beef Hambagu is quite possibly the best burger in LA. Period. You know how Umami’s burgers are really good but small? Yeah, well this one’s really good and big. And dense and meaty and flavorful and satisfying. Did I mention the two very soft sesame buns? And cold, crisp homemade pickles and caramelized onion jam? Royal yum.

Steingarten LA – West LA
Holy cow! Or should I say, holy turkey! Who knew you could get a doggone good burger at a wiener wonderland? The Westside’s answer to Downtown LA’s Wurstkuche, Steingarten LA is not only where to get exotic sausages made from salmon, wild boar, alligator and sundry other animals, but it’s also where to get a tasty burger. The housemade turkey patty has a particularly meaty quality, so if you’re trying to go leaner but still want a full-on burger experience, this would be it. Oh, and don’t forget to wash it all down with Parmesan fries and one of their rare micro brews or spectacular beer cocktails. (They’ve got stuff you can’t find anywhere else.)

O! Burger – West Hollywood
LA’s first all-organic fast-food joint is where to get a burger that is consistently flavorful. Everything on the menu is organic, from the classic grass-fed O! Burger and homemade gluten-free O! Veggie burger down to the canned soda. But my go-to is always the free-range turkey patty that comes with a choice of sauce (vegan Thousand Island, barbecue, chipotle or dairy ranch), caramelized onions, tomato, lettuce and a side of cole slaw. Or spare the carbs and get it in a bowl as a salad for a buck more. It’s worth it and still under ten bucks.

Umami – Multiple Locations
When the hallowed burger at Father’s Office was dethroned as LA’s best burger by many a foodie, it was the “fifth taste” of the Umami burger that was responsible. Disciples of this fast-growing burger empire swear by the signature Umami Burger stacked with oven-roasted tomatoes, carmelized onions, sauteed shitake mushrooms, Parmesan crisp and house-made ketchup. (And unlike FO, you can substitute the meat patty for a portobello.) There’s also the Greenbird made with turkey and green goddess dressing, but only order it if you like a meaty-tasting burg. Each location’s menu varies a bit, but you can be sure every outpost grinds their own meat, processes their own cheese and pickles their own veggies.

Baby’s Badass Burgers – Food Truck
Don’t judge a burger by the babes who are serving it. This hot-pink food truck might first come off as a T&A tour bus with a few meat patties thrown in for good pleasure, but the burgers from Baby’s Badass are really, well … badass. Besides, who could resist such a clever menu? The Cougar is made with aged beef, St. Andre cheese and black truffles (it’s to live for); the Mamacita is  stacked with pepperjack cheese, guacamole, tomato, grilled onions and jalapeno; She’s Smokin’ comes smothered in smoked cheddar, BBQ sauce, crispy onions and bacon; Cover Girl is made with a turkey patty; and Au Naturale is a veggie burger made with avocado, lettuce, tomato and grilled onions. The girls in the skimpy outfits are just the cherry on top.

In-N-Out – Multiple Locations
Cliche but true. No self-respecting “best burger” list would be complete without including the oh-so fresh burgers at this OG fast-foodie joint. Yes, the patties are on the smaller side (just order the Double Double, you hungry beast), but there’s a reason everybody from A-list celebs to down-and-out screenwriters love In-N-Out. The food is frickin’ fantastic! And dirt cheap! Sure, you’re never really able to get in and out just like that (especially during the lunch rush or post-club munchie run), but everything from the regular burger to the saucy animal-style burger to the meatless grilled cheese burger (with raw onions) is just top notch. And the prices can’t be beat.

Father’s Office – Santa Monica & Culver City
Call it Fascist’s Office. The burger at this overcrowded, infamously stringent gastropub is a bit of a turnoff with its “no substitutions” policy, but that hasn’t kept the masses away from its humongous, drip-down-your-chin juicy meat patty that’s combined with melted cheese, bacon, caramelized onions and arugula. Add a side of “frites in a basket” and it’s even better. Just remember, at FO, the menu is the boss of you. Don’t even think to ask for it your way. Or for a little ketchup with those fries.

M Cafe – Beverly Hills & Melrose
Macro what?? This LA temple to macrobiotic cuisine is big with the health-conscious crowd, but that doesn’t mean the food is boring. Aside from the delicious grilled salmon and assorted sushi options (try the spicy shrimp avocado roll), the Big Macro is the smart person’s answer to the Big Mac.  Served on a house-baked whole wheat bun, the whole grain brown rice & veggie patty is topped with a creamy sauce, lettuce, soy mozzarella, tomato, pickles, onion and sprouts. If you want to be naughty (wink wink), order the secret off-menu “Loaded Burger”–the Big Macro with sliced avocado and tempeh “bacon.”