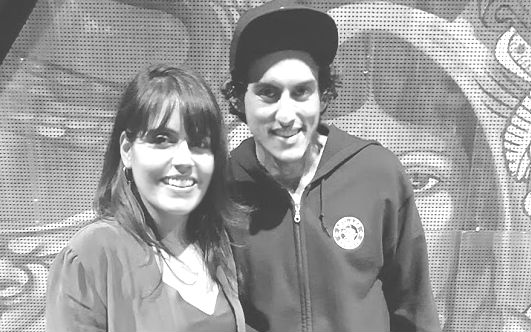 This story was originally published on 4/28/16 on Fox News Latino.

Art often imitates life. It certainly seems to be the case for Richard Cabral.

Though not exactly a household name, the 33-year-old actor was nominated for an Emmy in 2015 for his role in the ABC drama “American Crime” where he played a gang member caught in a drug-related murder. Now, in his new autobiographical one-man show “Fighting Shadows,” Cabral gives the performance of a lifetime as he recounts the details of his not-too-distant-past as a gang banger.

“This show has been four years in the making,” Cabral said after his opening night performance at The Rosenthal Theater at Inner-City Arts in Los Angeles. Co-written with the show’s director Robert Egan and produced by actress Jami Gertz, the piece, said Cabral, “changed my life, so I hope that it might possibly do that for others and be an inspiration.”

In the gripping 90-minute play, Cabral unleashes a beast of a performance that grabs you by the scruff of the neck, pulls you in close and doesn’t let go even after the last word is spoken and final note is played. A mix of gritty poeticism, visual artistry and live acoustic music from Mexican balladeer Rocio Mendoza, “Fighting Shadows” doesn’t glamorize gangster life nor does it gloss over Cabral’s history of violent behavior. Rather, it’s a deeply personal story of despair and desperation, love and longing, and ultimately, hope and healing.

Cabral grew up in the city of Montebello, a mostly Latino, working-class suburb about eight miles east of Downtown Los Angeles. Born into a family where gang life was an everyday reality, it wasn’t long before Cabral found himself on the same path. He was first incarcerated at the age of 13 and would spend the next twelve years involved in gangs and drugs, often in and out of prison.

Narrowly escaping a 35-year sentence (a twist of fate he recalls in his play), Cabral was released from prison at age 25, eager to get a job and get his life in order. “After prison, I was hitting up everywhere from McDonalds and Walmart to temp agencies, but I still couldn’t get anything because I had a [criminal] record and look the way I do” he said, pointing out his tattoo-covered neck and arms.

It was then, on the advice of “a former homie from my hood,” that Cabral went to see Father Greg Boyle, the Jesuit priest who, in 1988, founded Homeboy Industries, the largest and most successful gang intervention and rehabilitation organization in the world. The Los Angeles-based center supports some 10,000 men and women each year with free services and programs ranging from tattoo removal to job training.

“Meeting Father Greg and seeing that love really does exist changed everything,” Cabral said. “And the fact that a stranger could give what you might not be able to get from your own family was just so powerful. If it wasn’t for Father Greg, I wouldn’t be here having this conversation. There was nobody who wanted to give me — this young dude with tattoos and felonies — a chance. But this man did. He was able to see past my past.”

Cabral would eventually realize that getting a job as a baker was far more than just an occupation — it was the beginning of his transformation. “Homeboy Industries is a healing center for broken children. I was a broken child and they showed me how to put all those pieces back together. It’s not about being a gangster. It’s about being a man or a woman trying to recover and live better. ”

While working as a baker at Homeboy Industries, Cabral was discovered by the producers of NBC’s “Southland” and got his first acting gig – something that allowed him to express the creativity he never had a chance to nurture. “I always had a sense of being artistic but it was numbed down. I didn’t really know what it was and I didn’t have anybody to talk to or help mold it. In the barrio you’re not groomed to be an artist.”

Cabral’s artistic authenticity is evident in the TV and movie characters he plays, but it’s his real-life role that he takes most seriously.

“When I go into these institutions or I go out to talk to these kids, I don’t say ‘you guys.’ It’s not a ‘they’ thing. It’s me, it’s us. It’s a ‘we’ thing because I have suffered just like they do. I’m not some guy who got his education in college to learn about this stuff. I’m a person from the inside who knows what it’s like and understands the real feelings.”

As for what’s next, Cabral will return for a second season of “American Crime” and is set to appear in “Blood Father,” an action thriller starring Mel Gibson. Though he’s focused on “Fighting Shadows” and continuing his community outreach, one can’t help but wonder if Cabral ever takes a moment to reflect on how he’s gone from doing time with cellmates to reading lines with celebrities.

“It’s smoke and mirrors. I’m blessed to do what I love but the Hollywood thing isn’t…. For me, it’s not that I can recite lines or put on a one-man show. It’s about healing. I’m just going to keep sharing a message of hope and love.”