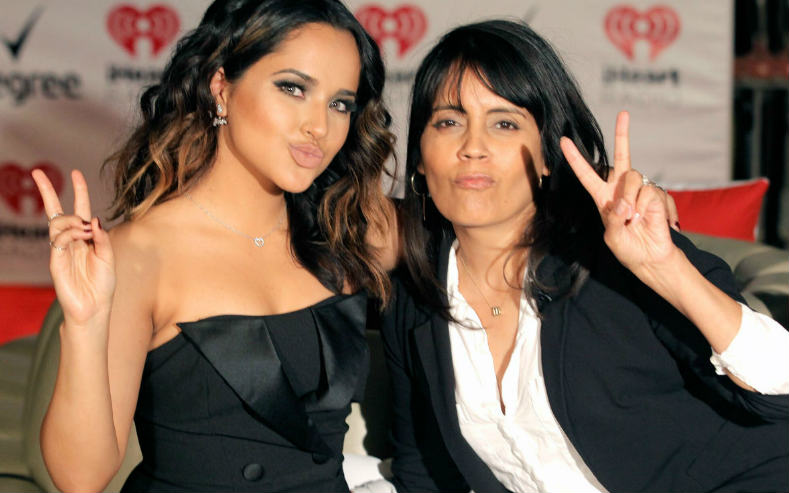 This story was originally published 5/13/16 on Fox News Latino.

She’s still a teenager, but success has been a long time coming for Rebbeca Marie Gomez, better known by her stage name Becky G.

Her 2014 breakthrough hit “Shower” was her first Top 20 hit in the United States, with the video racking more than 232 million YouTube views to date.

“Since I can remember, I’ve always been singing, performing or dancing. In the living room while I was cleaning the house, with all my cousins, anywhere, you name it. We could be walking around at the grocery store and I was just dancing all the time and singing,” she said backstage before her Degree Women concert at the iHeart Radio Theater in Burbank, California.

With such an ebullient personality, one might think that Gomez, the eldest of four children raised in a close-knit Mexican-American family, has led a charmed life. But it wasn’t always easy. When she was 9, her family lost their home in Moreno Valley, California (about an hour east of Los Angeles). It was time to do what many families across the country were forced to do during the recession — downsize. In the case of Becky G’s family, that meant moving into her grandparents’ converted garage in Inglewood, a working-class neighborhood of Los Angeles.

“That was my midlife crisis, my coming of age,” she recalled. “It was that moment when I was like, ‘I need to be a woman, I need to get myself together, what am I going to do?’”

What she did was get to work. Gomez started doing voice-overs and auditioning for commercials. “Our financial struggles are what really turned me to the entertainment industry,” she shared.

“I think too, because my parents are so young, I felt like we were growing up together. Aside from all the hardships that we went through, I still feel that I had a really great childhood because there was never any lack of unity, of family, of love or support. A lot of people are like, ‘Damn, you grew up in Inglewood?’ thinking it’s really tough and I was just fine. My parents always did the best to give us the best that they could.”

In 2011, she began uploading videos to YouTube singing her own lyrics over other artists’ tracks. It wasn’t long before the DIY productions caught the attention of a well-connected music producer and just like that, her life “changed completely.”

A couple years later, Gomez released her debut EP entitled “Play It Again” featuring the single “Can’t Get Enough” with Pitbull. The song received heavy rotation on Latin radio and became her first No. 1 Latin Airplay track. It was a moment that crystallized what she had dreamed about since she was a little girl.

“Con ganas! Just go for it!” she mused. “You can literally make your life whatever you want it to be as long as you believe in it. So if you have a dream and you say ‘I can do it’ you will do it. It’s hard, don’t get me wrong. Having patience is really important. Being patient with yourself, being patient with the people around you.”

For Gomez, patience is especially important in our culture of instant gratification and obsession with fame. “For some people, [success] happens quickly. But for me and my situation, it was not that at all. It was not pretty and not glamorous all the time. It’s nice to be able to be myself and have my fans accept that. At the end of the day, real recognizes real. That’s what people connect to – genuine people.”

Along with making music, Gomez is filming the big-budget remake of the ’90s TV series “Power Rangers,” where she plays the Yellow Power Ranger, Trini Kwan. The movie is set for a March 2017 release that will no doubt boost Gomez to even more success.

“I feel very lucky,” she said, “but I think that no matter how much success comes my way, I’m always gonna live like I’m broke.”

That said, Gomez confessed that there is one splurge she couldn’t resist. “This last Christmas my family and I moved into a new home. People are like, ‘Why didn’t you buy your own house?’ And my response is, ‘Why do I want to travel the world by myself and then come home into a house by myself?’ We live together. I don’t live with them, they don’t live with me. We live together. Until I’m married, I won’t be going anywhere! Good food, somebody to do laundry with. Why would I leave that?”