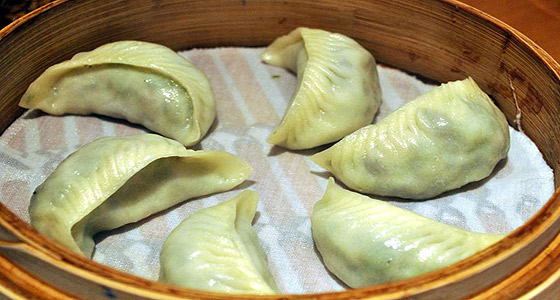 The New Year has arrived and with it the resolution to spend less money. But as someone who loves going out for a fine meal on the regular, it can be a resolution that’s a little hard to swallow. Or at least that’s what you might think at first. Los Angeles is a pricey place to live, duh, but there are plenty of places where you can get your grub on (and do it well) without spending mucho bucks. Here are some of my favorite budget-friendly food finds in LA that will help keep you on a deliciously frugal path.

Sawtelle Boulevard is full of delicious surprises and when I want to get full for less than $10, Asahi Ramen is my go-to for giant, piping hot bowls brimming with oodles of noodles that keep me fed for days. (Not kidding. I always leave with a bowl of leftovers that ends up being my breakfast, lunch or dinner the next day.) But it’s the ban ban ji–a mile-high mound of shredded, marinated chicken over a pile of julienned cucumbers–that I can’t get enough of. That and the addictively spicy cucumbers that you can order on the side for an extra $2 after the initial freebie they give you. FYI, this place is cash only. Not that you’ll need a lot of it. www.asahiramen.com

Yes, it’s another Mexican soup. What can I say? I love me a bowl of piping hot broth that tastes like home. And Mas Malo chef Robert Luna makes the best chicken pozole in town. (Aside from my grandma, of course.) The last time I was at Mas Malo he had made it even spicier, kicking it up a notch from its already supremely habit-forming level of ass-kicking heat. The big bowl of chicken, hominy and chili is just $7 and comes with all the fixings–shredded cabbage, sliced radishes, chopped onions, lime wedges and oregano flakes. Add a pair of those famous hard-shell tacos (I love the veggie “beef” & pickle versions, $6 for two) and you’ve got a full-on East LA meal for $13. Orale pues. www.malorestaurant.com

Okay, so I realize $15 isn’t dirt cheap, but I had to include this dish because it really is a good deal when you consider what you’re getting. There’s plenty of stuff on the menu for less than $15 (like the $8 Bavarian sausage + homemade pretzel with mustard sauce), but I just can’t get enough of the Haehnchen Schnitzel, a fill-you-up serving of breaded and sauteed chicken that comes with a choice of two sides. There are tons of sides, but I highly rec the housemade spaetzl, red cabbage and fried potatoes with bacon. You can also order it with a side of the wild mushroom sauce that usually comes with the Jaeger Schnitzel. Of course, it would be kinda weird not to have a beer at this German haus, so drop the extra $6 for the Köstritzer Schwarzbier, a black lager that goes down as smoothly as a verse from Johann Wolfgang von Goethe who famously sustained himself on black beer from Köstritz when he was unable to eat during a period of illness. Crazy! www.wirtshausla.com

This place lives up to its name with some of the best fish tacos I’ve had. They’re fried to order then topped with cabbage and your choice of salsa (check ’em out in the photo above–I like the radish relish best), cream and a squeeze of lime. It tastes even better with a glass of the $1 homemade horchata (a sweet milky Mexican rice drink). Order a few tacos and your entire meal will still cost less than a gallon of gas. www.bestfishtacoensenada.com

One more $15 number on my list. But here’s why it’s a budget-friendly food find: Would you look at the size of that fish?! If you were to go to any other comparable restaurant or order it on its own as a dinner entree, this delish filet o’ fish would cost you twice as much. Made with super-spicy, cayenne-crusted Hawaiian ahi, soy-marinated cucumbers, wasabi aioli, sprouts, lettuce and tomato, this sandwich at the oh-so charming Raymond is out-of-control, slide-down-your-arm messy good. It’s on the brunch and lunch menus and like all sandwiches here, it comes with your choice of sweet potato fries, side salad or the crispy shoestring fries. Reeedick! www.raymondrestaurant.com

Cheap + Sushi = Food Poisoning? Yeah, that’s what I tend to think at any given moment about any given restaurant that promises such a raw deal. But had I not been to this K-town joint myself, I wouldn’t have believed that you could get away with it and live to tell the tale. Every day 10:30am-3pm and 7pm-11pm everything on the conveyor belt is just $2. (And the food comes out covered. If it didn’t it would’ve been a deal breaker.) That means spicy tuna on crispy rice, salmon nigiri, California rolls, even dessert. FYI: If you want the freshest pick of the lot, sit near the kitchen where each item is prepared beforehand. www.fatfishla.com

I’m a sucker for sweets. Aside from my penchant for dainty little (overpriced) French macaroons, I find it hard to resist Beard Papa’s delish, giant-by-comparison cream puffs. What I love about them: Flaky outer crust and all-natural, not-too-sweet custard and cream filling. The original vanilla is great, but do yourself a favor and go when they have strawberry. OMG the fluffy puree filled with real pieces of strawberry is TO LIVE FOR!!! Also a must: The eclairs covered in a layer of dark chocolate. www.muginohointl.com

This dumpling house in the San Gabriel Valley is the stuff of legend and well worth the drive. (And the wait. Show up during lunchtime or pretty much anytime on the weekend and this place is jammed with people waiting out the door.) You can find all sorts of fried noodles, soups and buns filled with stuff like pork and red bean, but I come here for just two things: The addictively flavorful steamed vegetarian dumplings (10 for $7.25) and the garlicky spinach. Give me an order of each and I’m all set. (Well, maybe two orders.) The signature juicy pork dumplings that pop in your mouth like a mini liquid explosion (10 for $7.25) are also a winner if you wanna put a little oink on it. www.dintaifungusa.com

Nothing on the menu at this local healthy-eats chain is more than $10.50, so that’s good news any way you slice it. The $5 kale salad tossed with Parmesan and garlic vinaigrette is an absolute winner (even better when you add some protein) but one dish that surprised me is the octopus salad. I don’t like eating octopus much ‘cause I get completely grossed out by those little suction cup thingies, but somehow Chef Ryan got it right. The octo is charred and smoky and not too chewy and when mixed with wild arugula, roasted fingerling potatoes, shaved fennel, marinated chickpeas, olives, grilled lemon vinaigrette and a slice of charred toast? OMG TO LIVE! Also, you can’t beat the $3 watermelon agua fresca (with free refills as long as you’re eating in). www.tendergreensfood.com

There are 10 comments for this article