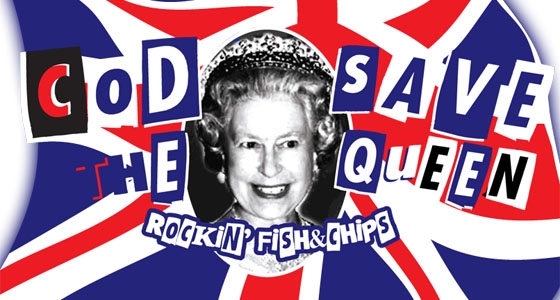 Even if you don’t have a lofty title like Dame Judi Dench or Sir Ben Kingsley, there’s no reason you can’t live it up like an English noble. Last year we were all obsessed with the wedding of William and Kate. This year it’s time to turn our attention to Her Majesty herself. That’s because the Queen’s Diamond Jubilee has arrived, marking the 60-year anniversary of Queen Elizabeth II’s reign on the throne. So what exactly does all this have to do with us here in Los Angeles? Try 15-cent afternoon tea, fabulous garden parties and yes, English food truck fare. Cheerio!

Langham Huntington – Pasadena
SUNDAY, JUNE 10, 12PM-3PM: Get ready to don your finest hat, wear your prettiest pink and enjoy an incredible afternoon tea because the Jubliee Anniversary Tea returns to the Langham Huntington Pasadena on Sunday, June 10. The lavish affair will turn back the clock to 1865, when the original Langham in London first opened, and offer a fabulous afternoon tea for the original price of 1 shilling, 6 pence (or 15 cents)! But take note: The last day to enter your reservation request is Thursday, May 31. Visit the hotel’s website and enter your contact information and the number in your party (parties of 2 or 4 accepted) for a chance to secure reservations. The hotel will inform guests after May 31 if your reservation has been accepted.

Four Seasons – Westlake Village
SUNDAY, JUNE 10, 11:30AM-3PM: If you want the royal treatment, head over to the Four Seasons Westlake Village where the British-American Business Council Los Angeles is putting on a fabulous fete for the Queen’s Diamond Jubilee. Join everyone dressed in their best garden party attire while enjoying classic British afternoon tea and sandwiches, Pimm’s cocktails, raffle prizes and more. Entertainment will be provided by bagpipe players and the Four Seasons Acoustical House Band who will play everything from the Beatles to Adele, the Stones to Oasis. Oh, and don’t forget the croquet lawn and beautiful gardens.

Palihouse – West Hollywood
SATURDAY, JUNE 2, 1PM-5PM: In celebration of Queen Elizabeth II’s 60 years upon the throne, you’re invited to wave a flag and join Brits in LA for their “Luvly Jubbly Jubilee” as they turn the Palihouse hotel’s courtyard into Buckingham Palihouse. The 1950s style street tea party will have plenty of tea and sandwiches, plus kids games in the parlour and photo opps in the hotel lobby. Silliness and 50s-era London attire highly encouraged. Tickets are $55 and include a complimentary commemorative mug. Children under 12 are free, limited two children per family. (It’s the British way.)

Rose Tree Cottage – Pasadena
SATURDAY, JUNE 2, 1PM & 4PM: This beloved tea house is where you can get a traditional English afternoon tea featuring everyone’s favorite edibles (cucumber sandwiches, we’re talking about you), delicious freshly baked scones with Devonshire cream and the Cottage’s own special preserves, all served on fine Royal Crown Derby and Royal Doulton bone china, naturally. Reservations are required for the Jubilee Tea Party, priced at $42.50 per person with proceeds benefiting Bloom Where Planted, Rose Tree Cottage’s charitable foundation for the children at Longonot Primary School in Kenya. Hats and tiaras are encouraged. Gentlemen–feel free to wear your ceremonial swords.

Cod Save the Queen!

Cat & The Fiddle – Hollywood
This Sunset Boulevard hangout is offering Victorian sponge cake and champagne for $9 during the long Queen’s Jubilee weekend.

Ye Olde Kings Head – Santa Monica
If a trip to jolly ol’ England isn’t in the cards for ye at the moment, head on over to this classic English watering hole by the beach for a royal tea and Beatles tribute band during the Queen’s Jubilee weekend. You can also buy plenty of commemorative items. (Sorry, chap. Pounds not accepted.)

Cod Save the Queen – Throughout LA
There’s no better way to honor Her Majesty than by indulging in the “best fish and chips west of the Queen Mother” don’t you think? Cod Save The Queen is LA’s one and only Union Jack-covered food truck that’s serving up some proper English fare like fish and chips, banger sarnies, cod and leek pie and more. Queen E would be proud. Okay, maybe not.