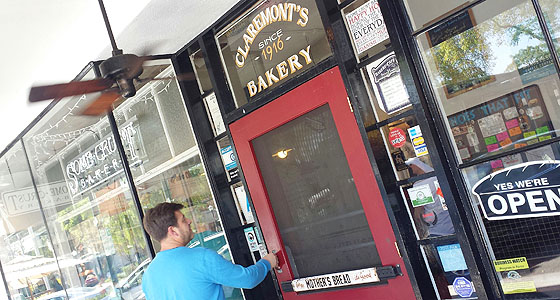 Have you been to the cute little town of Claremont??? It seems so far away … and it IS if you get stuck in traffic … but I was meeting a friend for a little work/lunch at this cute Asian fusion place called 50-Fifty, so I had a chance to take a quick walk along the tree-lined streets filled with independently owned shops, charming sidewalk cafes and historic buildings, not to mention the Claremont Colleges. No wonder it’s called “The City of Trees and PhDs.”

I only had about an hour and a half to fit everything in, but you really need a full day to walk around and visit all the cool spots including Some Crust Bakery, which has been around since 1916 (!!!), the Rancho Santa Ana Botanic Garden and the Folk Music Center, which is owned by none other than Ben Harper!!! About a 40-minute drive (or train ride) from LA will get you to this clean and cozy destination that has a NorCal vibe with a touch of Mayberry. (Oh, btw my friend told me that Claremont is where they filmed “Gilmore Girls” and the Disney classic “The Absent-Minded Professor” — cute!)

One of the many outdoor cafes.

Casa Moreno — my friend (a fellow Mex) said it’s ‘not the best’ Mex, but still good.

One of the many incredible cupcake concoctions at Some Crust Bakery.

You have to visit the Folk Music Center when you’re in town–it’s a music store, muse…