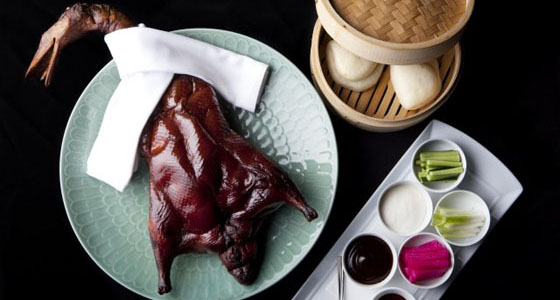 It’s the year of the horse according to the Chinese zodiac, but the bird is the word at Chinese restaurants across the country including here in Los Angeles. That’s because Peking duck–that crunchy, crispy, crackly creation originally from Beijing–has become a star attraction on menus. I admit I’ve never eaten duck and have no plans to ever do such a thing (too much love for Daffy and Donald, I suppose), but that doesn’t mean you might not want to indulge in this fowl creation. Read on for some of the best places to quack up your tastebuds in LA.

WP24 – Downtown LA
Along with the stunning views from Wolfgang Puck’s restaurant on the 24th floor of The Ritz-Carlton, guests at WP24 can get whole roasted duckling “Peking Style” with a basket of bao buns, traditional condiments and garnishes. Reservations a must.

Philippe – Beverly Hills
The crispy Peking duck at Philippe is available in a four-pound and seven-pound option, and specially prepared by Chef Chow with housemade pancakes. You’ll have to allow 45 minutes, so while you’re waiting you may as well order the Peking duck spring rolls and crunchy duck salad.

Tasty Duck – San Gabriel
The name says it all. Tasty Duck promises a lip-smacking, bird quacking experience with Peking duck that is served three ways: sliced with the skin separated from the meat alongside pancakes, plum sauce and scallions; paired with soup or stir-fried with bean sprouts; or all of the above.

Hong Yei Restaurant – San Gabriel
This Sichuan-Beijing restaurant offers the crispy Peking specialty, but make sure you order ahead of time or you’ll end up being a sitting duck yourself for about two hours. The dish is served either with soup or wrapped.

Duck House – Monterey Park
This house is devoted to duck (eaters) with their “famous” Peking duck offered in the traditional roasted fashion, stir fried with bean sprouts or in a duck bone soup, or all of the above, each served with a dozen pancakes. You have to order it an hour in advance, so rezzies are recommended. FYI, this tip comes from a Yelper: If you ask for the duck bones to go, you can take them home to make soup, porridge, etc … imagine that!

There are 7 comments for this article