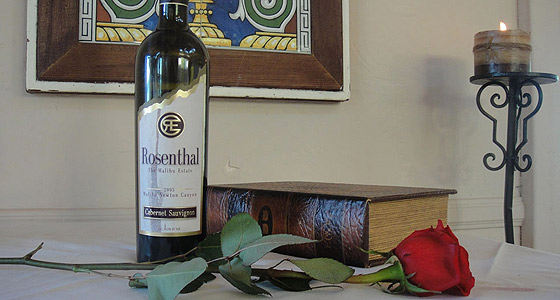 Psssst … I’m gonna let you in on a little secret. It’s something I didn’t even know about until recently, and the crazy thing is that it’s been going on for a few years now. And it’s fantastic. (And I’m not just saying that because Johnny Depp and a bunch of other famous people have pretty much said the same thing.)

Okay, so what is it, already? David Minkin’s Evening of Enchantment. I know, I know. Sounds banal. But it’s anything but. It’s really just what it says it is: an evening that will enchant you. More than just a magic show, it’s an experience. A very up close, cozy and cool experience. For one thing, it takes place at Beau Rivage, that charmingly old-fashioned French chateau/Mediterranean restaurant right off PCH in Malibu. (And conveniently located right next to the Rosenthal Malibu Vineyard Tasting Room.)

The first hour takes place in the upstairs patio where you’re treated to four generous pours of different Rosenthal wines, all-you-can-eat-buffet-style hors d’oeuvres and of course, lovely ocean views. (They also extend 20% off bottles of wine at the Tasting Room immediately following the show.)

The second hour is when things go underground. Literally. That’s when you head down to the restaurant’s candle-lit wine cellar. It’s a small space, but that’s why the show is limited to 30 people and affords excellent views of Minkin’s magic no matter where you’re seated. Speaking of magic … without giving anything away, let me just say that you will be scratching your head trying to figure out how the frick this guy just did what he did. Six words: THINGS FLY THAT SHOULD NOT FLY.

I promise the show is not cheesy like this photo

My extremely skeptical and brilliant fiance actually participated in the show at one point and we still don’t know how Minkin was able to pull off some of the things he did. And we were THISCLOSE to him. Not surprising that Minkin has won international awards for his up-close magic, including first place from the world’s largest organization of magicians with more than 13,000 members in 73 countries.

So there you go. The best-kept secret in LA has been let out of the bag. And it’s pure magic.