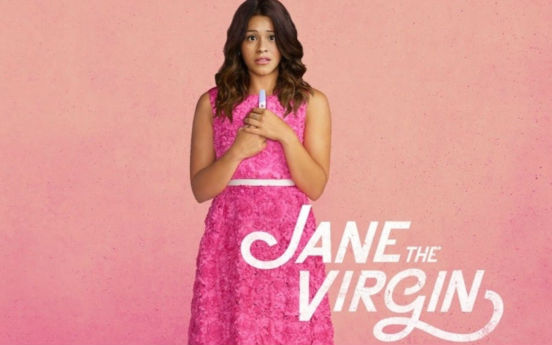 This story was originally published on 10/10/14 on Fox News Latino.

Ever since her breakout performance as a hard-hitting East LA rapper in 2012’s “Filly Brown,” Gina Rodriguez has steadily risen as one of Hollywood’s hottest and most refreshingly honest stars. Her outspoken stance on changing the industry’s standard of beauty and the importance of taking roles that positively represent Latinos is the stuff of headlines. Now, with a new movie ready for release and a primetime TV show called “Jane the Virgin,” the 29-year-old seems set for even greater success.

In “Sleeping with the Fishes,” a quirky romantic comedy centering around a Latino Jewish family, Rodriguez plays Alexis Fish, a broken-hearted phone sex operator who’s trying to make sense of her life after the death of her cheating husband. The movie also stars Ana Ortiz (“Devious Maids”) as her kooky older sister Kayla. Written and directed by Nicole Gomez Fisher, the movie was shot in New York in just 19 days. It first premiered at the Brooklyn Film Festival where Fisher won Best New Director and in August, the film won Best Director at the 29th Annual Imagen Awards.

Rodriguez says the film was a “total joy” to make, but also admits that the role proved to be a weighty challenge in more ways than one. “I really got to get inside this character and get outside of my own body and comfort zone,” she says. “For one, I gained about 20 pounds. The character is going through a time in her life when she’s not at her best and feels outside of her skin not only physically, but also emotionally. During that time I was also going through a heartbreak of my own that I had never experienced. I usually play these very strong, tough, badass women. I never had the opportunity to be as self-conscious and vulnerable as I did with ‘Sleeping with the Fishes’ and it really scared me—terrified me, actually—when I read the script.”

A particularly eye-opening moment came when Rodriguez finally saw herself as Alexis on the big screen. “I watched the film almost a year after I had already lost the weight, and mind you, I’m still a curvy girl. But at one point I had to stop myself and say, ‘Wait a minute; what do you base your life on? Your looks or your character?’ I need to be comfortable in who I am whether I’m curvier or not. She’s no less beautiful because of her size. It’s difficult to have these kinds of conversations because we’re programmed by society to look at things a certain way.”

Looking at things her own way is something the NYU Tisch grad learned to do early on. “My amazing parents taught me that you have to look in the mirror every morning and say, ‘I’m enough. Right now. Today. I don’t need anything else to make my dreams come true.’ As soon as we realize that everybody has their own unique journey and that perfection doesn’t exist, then we can all be liberated from these ideas that we’re not enough. Because guess what? We are! Now go own your power and kick some ass!”

Although the spotlight is shining more brightly on Rodriguez these days, the reality is that less than five percent of actors in top Hollywood films are Hispanic, according to a recent study by the University of Southern California. It’s a pretty astounding statistic considering that Hispanics are the second-largest ethnic group in the country. So how important is it to espouse the ‘Latino-ness” of a role considering they are so few and far between and often perpetuate stereotypes?

It’s a touchy subject about which Rodriguez has been very vocal but doesn’t claim to have the answer. “There’s nothing wrong with being or portraying maids or landscapers and telling those stories. But when other stories are not told you limit the Latino experience for Latinos, for the American mainstream and really for everybody. Sometimes it feels that if Latinos are American then we’re somehow denying our Latino-ness. No, we are bicultural. People know I wave my Puerto Rican flag everywhere I go, but at the same time, I was born here in America, I’m American. We shouldn’t have this fear of having to authenticate one or the other. On [Jane the Virgin] my character’s grandmother speaks Spanish and I reply in English. That is the reality of my whole life and the reality of all my friends’ lives. If that’s not Latino enough for you then I don’t know what is.”

For someone who pretends for a living, being real is what Rodriguez does best. “Look, I don’t know the answer. I’m always learning, always growing and I feel like a student who still hasn’t arrived. People don’t need to be smacked over the head with my Latino-ness or my American-ness. How about we leave it in its truth and realize it doesn’t have to be a certain way?”

As she sees it, “It’s the same thing with ideas of beauty. If a girl’s thicker, it doesn’t have to be commented on every three seconds. I feel that ‘Sleeping with the Fishes’ and ‘Jane the Virgin’ get it right by simply telling a story that doesn’t hit you over the head with one thing or another. I just happen to have a brown face and I love it!”